Breaking down the risk silo

I often hear from many risk analysts that we need to break down the risk silo and stop measuring risk in unique disciplines. But such a statement without thinking begs the question: If the silo is so evil, why did we invent the structure in the first place?…
Continue

Following the recent launch of Strategy & Risk Studio, Manigent have released a lite version of the application to allow users to download the product free of charge!

When it comes to central clearing houses and regulation, it has been a hive of activity this year.

Literally every jurisdiction is in the midst of trying in someway to fit swap contracts from the OTC domain into a clearing house. It appears however, that some clearing houses seem to be having better luck at doing this than…

Banking today is viewed upon by the customers it is designed to serve as sick.

Theoretically bankers have lost the plot it seems but I am not really sure they ever had the plot to begin with, why is that?…

The best financial company of the month in Sweden?

You can easily check the report on your mobile using the s-peek App (for free on ITunes and Google Play). 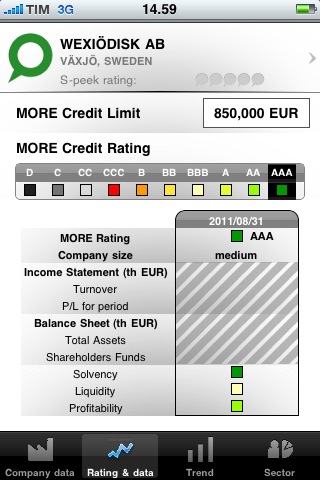 What is the most serious cyber threat at present?

Compliance new round up

The FSA has in recent months warned the Financial Conduct Authority (FCA), which will take over conduct regulation when the FSA is split by the end of the year, will take a more aggressive approach to intervening in the design of financial products. Linda Woodall, head of the savings and investments department at the FSA, told Investment Adviser that “some development” may be…

The financial ratings of each European companies in your smartphone!

Wondering whether a company is going well or bad? If it is large or small? If it is profitable? Thanks to s-peek it is now possible to understand these easily.

s-peek is the unique free mobile application that allows you to understand and assess the economic reliability of each company in Europe (from Portugal to Russia, from Finland to Turkey).

Thanks to s-peek you can access to the rating, credit limit, financial information of over twenty million companies and download…

The European Banking Authority released a statement indicating that gaps exist in the capital standards for about 20% of the regions top 48 largest banks. Meanwhile, the Bank for International Settlements has posted a relatively positive report on Asian banks loan reserve practices.

Are Asian banks in front of the game for…

This is a copy of the latest CompliSpace blog orginally published at http://http://complispace.wordpress.com/2012/04/04/10-reasons-why-your-enterprise-risk-management-program-wont-work/.  Would love to get your feedback.

Dimensioning Dependency, Correlation, Causality and Mutuality for multiple risk factors is an important modelling exercise risk analysts should entertain. Not doing so is one of the reasons why CAPM is busted.

Is your risk management program on target ?

This Conference will help you to get the benefits of referring to the ISO 31000 standard.

With more than 30+ speakers, 4 plenary sessions, 10 parallel sessions including training opportunities, this international conference is the risk management event of the year.

20 years of Risk Management Standardisation - Past, Present and Future

Strategy and Risk for the iPad

Designing an organisation’s Strategy & Risk Management framework does not have to be difficult. Strategy and Risk Consultancy, Manigent, have created an innovative new way for risk and compliance practitioners to quickly develop and document their strategy and risk model: Strategy and Risk Studio for iPad.