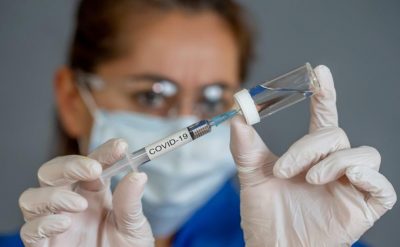 At times, meds are more dangerous than diseases they’re supposed to protect against or cure.

Independent experts agree that all vaccines are hazardous to human health because they contain mercury, aluminum, formaldehyde, phenoxyethanol (antifreeze), and other toxins able to weaken and potentially destroy the human immune system.

“(t)here is no evidence whatsoever of the ability of vaccines to prevent any diseases.”

“To the contrary, there is a great wealth of evidence that they cause serious side effects.”

In her book titled “Vaccination 100 years of Orthodox Research,” she explained that vaccinations are biological weapons.

They can damage internal organs and leave children or adults vulnerable to severe autoimmune diseases – including diabetes, arthritis, hepatitis, multiple sclerosis, osteoporosis, polio and numerous others.

Rushed to market coronavirus vaccines by Big Pharma will be especially hazardous and should be avoided to protect human health.

When available, a full COVID-19 vax treatment of millions of Americans would have a market potential dollar volume of around $150 billion of near-total profit, according to one estimate.

The global market potential is much greater — why the race is on to cash in big, with full support from policymakers in Washington.

There’s no need to be vaxxed when a known cure for COVID-19 already exists.

Big Pharma, establishment media and US policymakers are suppressing what everyone has a right to know because of a potential bonanza of profits once FDA-approved coronavirus vaccines are declared developed and ready for human use.

Hydroxychloroquine (HCQ) combined with either azithromycin or doxycycline and zinc are cheap, safe, and highly effective in curing the SARS-Cov-2 virus that causes COVID-19 when used early after infections are diagnosed.

Physicians using this protocol stress its effectiveness — why hazardous to human health vaccines aren’t needed and should be avoided.

Without justification, he claimed rushed development is unrelated to boosting Trump’s reelection prospects — despite DJT saying he wants a vaccine available for human use pre-election, adding:

“It is up to the (drug company) sponsor to apply for authorization or approval, and we make an adjudication of their application.”

Approving a likely hazardous substance for mass-vaxxing in the US and elsewhere is unacceptably playing Russian roulette with human health — what no public health official should authorize anywhere.

In early August, Russia’s Sputnik V coronavirus vaccine was released for human use, following 20 years of research and development.

Despite years of research elsewhere, no successful coronavirus vaccines were ever developed, notably not in the West.

Highly promoted, rushed to the rescue Big Pharma COVID-19 vaccines for mass-vaxxing will be the largest ever public health experiment likely to go awry with potentially harmful consequences for untold numbers of victims.

Public health experts in the US and abroad warned that these vaccines “could be unsafe,” the FT reported.

Hahn ignored reality, claiming that approving a coronavirus vaccine for human use before completion of phase three trials is permissible by “emergency authorization” for certain groups, without further elaboration, adding:

“Our emergency use authorization is not the same as a full approval.”

“The legal, medical and scientific standard for that is that the benefit outweighs the risk in a public health emergency.”

Fact: Risks way outweigh the benefits of using vaccines for any purpose.

Fact: At times, the risk of causing diseases they’re supposed to protect against is unacceptably high.

The 2016 documentary film “Vaxxed: From Cover-Up to Catastrophe” discusses the link between the MMR (measles, mumps, rubella) vaccine and autism.

According to senior MIT research scientist Stephanie Seneff, autism at its current observed rate is projected to affect around half of vaccinated boys by 2025.

US major media journalists are instructed by the CDC on how to report on vaccines — what to say, what to suppress, ignoring scientific evidence.

“They have the potential to generate virulent viruses by recombination and the recombinant nucleic acids could cause autoimmune disease.”

Children’s Health Defense founder Robert F. Kennedy Jr. explained that in 2017, the WHO “reluctantly admitted that the global explosion in polio is predominantly (from a) vaccine strain,” adding:

“The WHO is a sock puppet for the pharmaceutical industry” — the same true for the CDC and other US public health agencies.

Big Pharma’s interest is all about max-profiteering above all other considerations, no matter the risks to public health.

None of this gets publicly reported. Instead, the myth of safe vaccines and importance of getting them persists — despite clear evidence proving otherwise.

Last weekend, Trump said the FDA is moving too slowly in approving a coronavirus vaccine for human use.

The FT reported that “(a) day later, Dr Hahn and Mr Trump jointly announced emergency authorization for convalescent plasma, which uses the plasma of recovered Covid-19 patients as a treatment” — with little of no evidence of its efficacy.

Hahn told the FT that he regretted saying plasma treatments would have saved many lives, adding:

“I certainly regret contributing to any misperception. I could have done a much better job…explaining relative risks.”

Anyone testing positive for COVID-19 should seek immediate treatment with hydroxychloroquine (HCQ) — combined with either azithromycin or doxycycline and zinc.

Note to readers: please click the share buttons below. Forward this article to your email lists. Crosspost on your blog site, internet forums. etc.

Award-winning author Stephen Lendman lives in Chicago. He can be reached at lendmanstephen@sbcglobal.net. He is a Research Associate of the Centre for Research on Globalization (CRG)

His new book as editor and contributor is titled “Flashpoint in Ukraine: US Drive for Hegemony Risks WW III.”

Visit his blog site at sjlendman.blogspot.com.

Featured image is from Shutterstock