Prosthetics include the use of artificial limbs (prostheses) to enhance the function and lifestyle of individuals with loss of limbs. The prosthesis has to be a precise combination of appropriate materials, alignment, design, and construction to fit the individual's functional needs. These requirements are dynamic and differ from the upper and lower extremities. 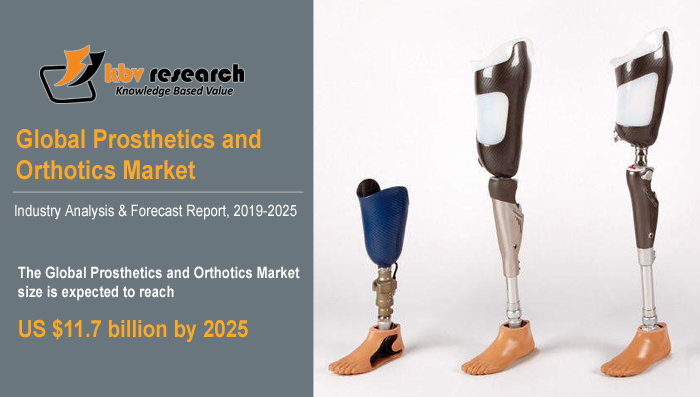 Orthotics requires precision and ingenuity in the design and manufacture of external braces (orthoses) as part of a recovery method for a patient. The orthosis serves to regulate a physically disabled person's damaged or deformed regions of the body. Orthoses can be used in various body parts, including upper and lower limbs, cranium, or spine.

The prosthetics and orthotics industry is at the peak age of artificial limbs with brain-controlled prosthetics available. This technology is only in the early stages, with the user having to use a brain implant to monitor his leg. But work is advancing quickly, and in the very near future, we may see regulation of the next generation of prosthetic limbs without a brain implant.

They aim to build wearables using the same brain functions that are used to regulate movement, bringing cognitive intelligence into the actual prosthetics, allowing for complete integration without intrusive brain operations.

3D printing has become a trend not only in the field of manufacturing and construction but also in the whole of the prothesis culture. Throughout the world, 3D printing allows cost-effective development of working, prosthetics, enabling both children and adults to use lightweight, futuristic limbs in daily life.

That's even saving lives in some countries. In countries like Sudan, where children are recruited into rebel forces, wounded by weapons, landmines, and competing gangs, these 3D prosthetic limbs give these children and adolescents the chance to recover some normality in developing countries. As technology progresses we should expect to see more increases in the complexity of these 3D-printed limbs.

Microprocessor-controlled prosthetics provide some typical prosthetic issues with a cutting-edge approach and are already available to the public. Mechanical prosthetics were used before the microprocessor. The mechanical edition, though still helpful, does not permit imitation of the way body parts work.

Activities such as standing, walking, and ascending stairs require a complex biological network of joint, tendon, bone, and muscle movements. The microprocessor can imitate these gestures, suit the walking gait of the person, and provide smoother, more natural motions through this development of the technology used in prosthetics.

The growing prevalence of bone-related diseases like osteosarcoma, osteoporosis, and osteopenia would accelerate the growth of the global market. The increased geriatric population will also drive market growth. Osteosarcoma is the most common malignant bone tumor in the body. Osteosarcoma is believed to originate from primitive mesenchymal bone-forming cells, and its histologic hallmark is the development of malignant osteoid.

Certain cell populations may also be present, as these types of cells could also originate from pluripotential mesenchymal cells, but any region of malignant bone in the lesion is classified as osteosarcoma. Osteosarcoma is a dangerous type of musculoskeletal cancer that most commonly causes patients to suffer from metastatic pulmonary disease.

Different categories of prosthetics and orthotics:

Orthotics is a medical field that deals with the design, manufacture, and fabrication of artificial devices called orthoses. The orthosis controls deformed or damaged parts of a person’s body. The skeletal and neuromuscular structures are mounted on the body to correct or modify the structural and functional characteristics.

In the future, the orthotist/prosthetist’s clinical position will continue to develop with the implementation of new, contemporary care models that concentrate on assisting clients in defining their treatment goals and assessing how effectively those goals have been achieved. Practitioners are required to use high-level communication skills to promote conversations, thereby assisting clients in defining their own treatment goals and informing their decision about orthotic/prosthetic treatments despite an understanding of the likely outcomes.