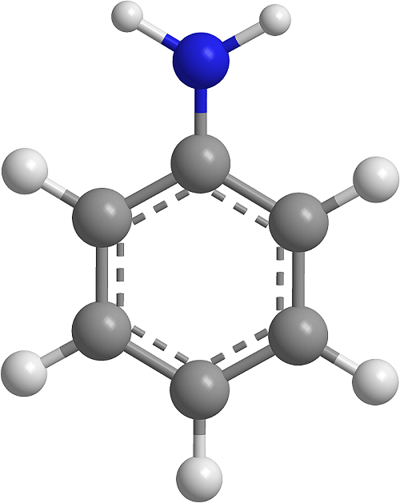 Aniline (C6H5NH2) is yellow to brownish oily liquid possessing a musty fishy odor. Aniline consists of an amino group attached to a phenyl group and is the prototypical aromatic amine. Aniline is used as a precursor while producing a wide variety of products such as polyurethane foam, agrochemicals, synthetic dyes, antioxidants, rubber additives, varnishes and explosives. The key raw materials used for the industrial production of Aniline are Benzene, Hydrogen and concentrated Nitric Acid. The most common route for Aniline production is through nitrobenzene which is produced via nitration of Benzene in a continuous or batch process. This is followed by the catalytic vapor phase hydrogenation of Nitrobenzene. About 75% of the global Aniline produced is utilized for the production of methylene diphenyl diisocycanate (MDI), a chemical compound used as a raw material in a wide variety of sectors such as construction and automotive and for consumer products such as household appliances, clothing and footwear.

The Asia Pacific Aniline demand surpassed its Q2 quarter levels as strong demand for MDI served as the key contributing factor for improved margins. The Chinese Aniline plant operating levels have been high, driven by increased buying sentiments right from mid-June onwards, which however, is yet to regain strength up to the pre-pandemic levels. Strong recovery in PU foams sector which is used in the furniture and appliances is predicted with many Southeast Asian producers ramping up production feeling the festive push. Indian Aniline demand from the pharmaceutical industry remained high throughout the quarter with several market players receiving shipment orders from the US.

The Aniline market remained pressured in the third quarter as the second wave of COVID-19 wreaked havoc in the Europe Union. The demand for Aniline from the downstream automotive and construction sectors remained muted as the economy continued to grapple with the economic downturn. The pricing curve maintained grounds as there were several reports of downstream MDI plant turnarounds in the region, further pressing the demand side. Production outages at several automotive factories further crimped the Aniline consumption. The quarter ended with the news of Borsod Chem starting production at its new 200 KTPA aniline plant in Hungary during Q3 FY21.

Regional Aniline demand witnessed a sharp rebound with strong uptick in PU demand from the automotive and construction sector which remained in doldrums during the second quarter as the nation continued strictest coronavirus-related restrictions on economic activity. The end-use markets reported supply tightness due to logistic disruptions and plant closures in several US provinces caused by the Hurricane Laura. Aniline consumption by the manufacturers of methylene diphenyl diisocycanate (MDI) showed sharp recovery with better sales figures reported from sectors such as consumer durables and home appliances.