To build new industry value chains that benefit people, society, and the planet, we need a new economic operating system. 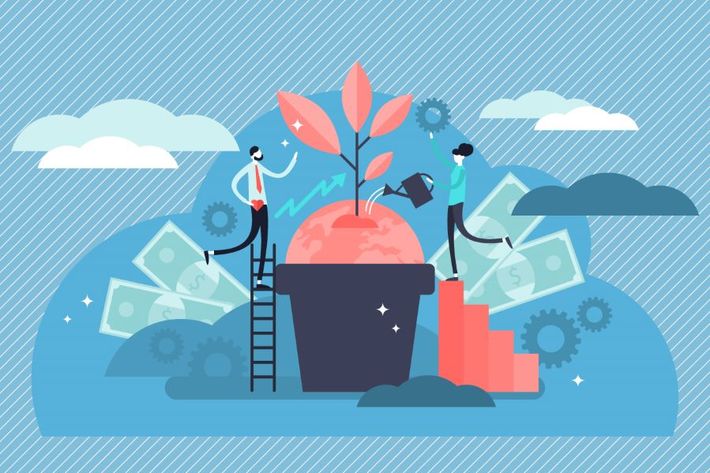 In 2020, the world is grappling with COVID-19 along with several other major crises. The International Monetary Fund predicts that the world could experience the worst recession since the 1930s this year, with the global economy contracting by 3% as advanced economies shrink by 6.1%. The World Trade Organization expects global trade to fall by as much as 32% in 2020. The Organisation for Economic Co-operation and Development reports that inequality in the world’s most developed economies is at its highest level in 50 years. The World Meteorological Organization recently warned that over the next five years, annual global temperatures could potentially rise more than 1.5 degrees Celsius above preindustrial levels, leading to catastrophic climate change.

There is much talk now about “rebooting” the economy, akin to rebooting a computer. But the operating system that runs most economies in the world, namely capitalism, has become obsolete, for four main reasons. First, capitalism extols the virtues of private ownership, individualism, and competition, which drives companies to accumulate and hoard assets and compete with one another in a zero-sum game. Second, it seeks economies of scale through mass production and global supply chains, which are heavily polluting and resource-hungry, and lack the flexibility to deal with cataclysmic disruptions like COVID-19. Third, it incentivizes companies to maximize short-term profits solely for shareholders rather than create long-term value for all stakeholders. Fourth, capitalism neglects to hold businesses accountable for the negative consequences of their activities, such as social inequality and ecological degradation.

Given these deep systemic flaws, it makes no sense to reboot a dysfunctional capitalist economy. Instead, we need to upgrade and reinvent it to make it more efficient and agile, socially inclusive, and ecologically beneficial. Even before COVID-19, the discussion around “stakeholder capitalism” and “eco-capitalism” had been underway for quite some time. But while these concepts address some of the flaws of capitalism mentioned above, they don’t tackle all of them. Although these concepts have enabled individual companies to boost the impact of their corporate social responsibility programs, they haven’t created breakthrough multicompany business models that fundamentally reshape the structures and dynamics of entire industries.

It’s time to think bigger and bolder. To build and support radically new industry value chains that are truly beneficial to people, society, and the planet, we need a new operating system that I call a frugal economy.

A frugal economy strives to create more economic, social, and ecological value simultaneously while wisely optimizing the use of all available resources. Unlike the “do more with more” capitalistic system, which uses ever more resources to create ever more products, the frugal economy aims to do better with less by making the most of all existing resources to maximize the value for all stakeholders. A frugal economy responds to the needs of cost-conscious consumers hard-hit by the recession and seeking a healthier and more eco-friendly lifestyle in the aftermath of COVID-19.

This multitrillion-dollar new economy is already emerging, fueled by three megatrends that will reshape the next decade: B2B sharing, distributed micromanufacturing, and triple regeneration.

Cocreate better value from all resources with B2B sharing. Millions of citizens worldwide are already practicing collaborative consumption by sharing their cars and apartments with one another through platforms like Uber and Airbnb. This is the business-to-consumer sharing economy, which PwC has estimated will grow to a $335 billion market by 2025.

Visionary companies are, in turn, shaping the business-to-business sharing economy by sharing their physical and intangible resources and assets with one another. By keeping their resources and assets fully utilized, companies can maximize value, generate new revenue, drastically reduce waste, and amplify their positive impact on society. Given its sheer size, this B2B sharing market could potentially be worth several trillion dollars.

B2B sharing is already well underway in Asia and Europe but is struggling to take off in individualistic and competitive corporate America. In India, for instance, EM3 Agri Services’ B2B sharing platform gives small farms on-demand access to equipment like tractors and crop management services on an affordable pay-as-you-go basis. This enables farmers to produce more — and earn more — using fewer resources. At Les Deux Rives, a business district in the heart of Paris, 30 colocated enterprises share office space, equipment, and services, and recycle/upcycle waste as an integrated, synergistic network.

In the Netherlands, Floow2’s B2B sharing platform enables organizations to share business equipment, enabling hospitals, for example, to share their medical devices and services, thus maximizing their asset use and patient care.

B2B sharing isn’t limited to equipment and physical assets. Companies can also share their employees with one another. Vénétis is an association of 360 small French businesses that hires experts — in fields as diverse as industrial quality control and web marketing — as full-time employees and shares them on a project basis among its member businesses, thus replacing unstable part-time jobs with safe, “shared-time” jobs. People + Work Connect is a new analytics-based employer-to-employer platform colaunched by Accenture, Lincoln Financial Group, ServiceNow, and Verizon that helps people laid off during COVID-19 rapidly find work in another organization.


Boost resilience and agility with distributed micromanufacturing. Europe in the 19th century, America in the 20th century, and China in recent decades all achieved rapid economic growth by scaling up manufacturing with big centralized factories. But this energy-hungry mass-production model has depleted natural resources and seriously damaged our environment. As the COVID-19 crisis emerged, the U.S. and European nations faced dire shortages of critical products like medical supplies; having massively offshored their industrial activities to lower-cost countries, they quickly recognized the urgent need to “reshore” and bring manufacturing back to their home countries.

Rather than scale up, what if we were to scale out manufacturing by building smaller, more agile, and eco-friendly factories located closer to the points of consumption? This would help produce goods more quickly and cheaply using local talent and resources, bringing benefits for both the local economy and the environment. For instance, in partnership with Local Motors, an open-source hardware innovator, GE Appliances has set up a microfactory, called FirstBuild, in Louisville, Kentucky. FirstBuild engages local community members — students, designers, engineers, and makers — and a global network of innovators to cocreate next-generation consumer appliances faster, better, and more cheaply using agile techniques such as digital prototyping, 3D printing, rapid iteration, and small-batch production. FirstBuild swiftly responded to COVID-19 by making 3D-printed face shields for health care workers.

Companies like Imaginarium, India’s largest 3D printing service company, are making distributed micromanufacturing a reality in emerging markets. Unlike the high-volume, low-variety Chinese mass-manufacturing model, Imaginarium uses its 3D printing facility in Mumbai to enable mass customization through low-volume but high-variety and high-value production. For example, Imaginarium was able to quickly 3D-print a customized titanium cranial implant for a patient who had lost a skull fragment in an accident, saving his life.

Raise the bar on sustainability with triple regeneration. To effectively fight climate change, many companies are adopting the principles of the circular economy to recycle waste materials into new products. Unlike the linear “take-make-waste” economic model — wherein we take raw materials from the earth to make new products, which, after being used, go to waste — the circular economy seeks to reduce consumption by reusing and recycling resources and materials in a closed loop along the value chain.

For instance, in 2016, Jaguar Land Rover (JLR) launched the Realcar (Recycled Aluminium Car) initiative that produced Jaguars made from 75% recycled aluminum. This success led JLR to launch Reality, an ambitious companywide initiative to recover aluminum from end-of-life vehicles to build next-generation vehicles, including an all-electric car.

Companies can raise the bar on sustainability even higher by adopting the principles of regeneration. While sustainable businesses simply try to reduce their carbon footprints to curb their negative impact on the planet, regenerative companies intentionally increase their positive impact on society and the environment. According to a ReGenFriends study, nearly 80% of American consumers prefer regenerative brands to sustainable ones and find the term sustainable too passive.

To attract and retain environmentally minded customers, manufacturers must upgrade their value chains from sustainability to regeneration. They can do so by emulating Interface, the world’s largest modular carpet manufacturer, which has built a “factory as a forest” in Australia. This virtuous plant goes beyond the goal of having a zero environmental footprint to instead provide the same benefits as high-performing ecosystems, such as clean air and water, carbon sequestration, and nutrient cycling.

While regenerating the planet is very noble, we also need to regenerate communities, particularly the people and places afflicted by COVID-19 and the recession. Vanguard companies should practice what I call triple regeneration, which aims to restore, renew, and grow people, places, and the planet in an integrated and synergistic way.

The food giant Danone is pioneering triple regeneration through its “One Planet. One Health” agenda. Danone is helping its farming suppliers transition to regenerative agriculture, a science-based approach using natural methods like crop rotation to enrich the soil and increase yields while dramatically minimizing emissions and the use of fertilizers, pesticides, and irrigation water. As a result, Danone is revitalizing fragile rural farming, allowing farmers to produce more — and earn more — at lower cost and to boost the quality and value of their land in the long run. High-vitality soil also yields foods richer in nutrients, which is better for Danone’s consumers’ health.

Some progressive companies focus their triple regeneration efforts on people, by ensuring that human talent — the most valuable of all resources — is not wasted. For instance, Recygo— a joint venture between the French postal service and the water and waste management giant Suez — hires, trains, and employs socioeconomically disadvantaged people for its office-paper recycling service. Fiam, a high-end Italian glass furniture company, tapped the talent and imagination of young artists to upcycle glass waste from its factory into magnificent pieces of furniture. These young artists became design celebrities overnight.

By regenerating people, places, and the planet, companies could bolster the well-being of millions of individuals, reinvigorate thousands of communities, and usher the world into a low-carbon economy that could generate $26 trillion in financial value and create more than 65 million new green jobs globally by 2030.

Corporate leaders must reframe the current pandemic crisis and recession as a historic opportunity not only to reinvent their company’s business models but to reshape the entire economy. By boldly adopting B2B sharing, distributed micro-manufacturing, and triple regeneration, companies can co build a human-centered frugal economy that is financially profitable, socially inclusive, and ecologically virtuous.

Navi Radjou (@naviradjou) is an innovation and leadership author and adviser based in New York. He is a fellow at Cambridge Judge Business School at the University of Cambridge in England.