1) What is Succession Certificate?

In the absence of a will, this is the primary certificate through which the heirs can stake a claim to the assets of a deceased relative.

Moreover, it protects the payer that the debt released by him has gone to a certified person.

The successor would receive assets as well as inherit any debts/loans to be paid, as per the Indian Succession Act, 1925. The governing Sections are 380, 381 & 382.

The Legal Term, for when a person has died, without making a legally valid will. Intestate may be the entire assets or some particular ones only. In other words, intestacy is either total or partial.

Total intestacy is when the deceased has not named any beneficiary to any of his property. In other words, the will wasn't made or doesn't exist.

Partial intestacy is where the deceased effectively disposes of some of the beneficial interest in his property by will. But not all.

Indian Succession Act, 1925 governs the procedure and has laid down the mandatory requirements for Succession Certificate.

A succession certificate is issued by a district judge. The relevant judge is from the court that has jurisdiction in the district where the deceased person ordinarily resided. Where no such place is available, the jurisdiction within which any property belonging to the deceased may be found.

The legal heirs of the deceased must file an affidavit petitioning their claim to the property. The petition is to be made to the District Judge or in High Court. It needs to be signed and verified by the applicant. It must include the following details:

The procedure after the petition has been submitted to the district judge of the high court:

Step 1: The petition is submitted along with court fees. The Court Fees Act, 1870, prescribes a specific percentage of the value of the estate. This is to be paid in the form of judicial stamp papers. This fee varies from State to State, in India.

Step 2: The Judge will inspect the application. And make it public by issuing a notice in the national newspapers. And send a notice to all the respondents. The notice calls for objections, if any, to issue a succession certificate. It generally provides a period of 45 days to protest, with necessary documentary proofs. After 45 days are over, he will fix a date for the hearing.

Step 3: At the date of the hearing, the judge will decide if the applicant is within his right to apply. If satisfied, he shall grant the certificate. The certificate would specify the debts and securities set forth in the application. It will mention the powers granted to receive interest/dividend or to negotiate/transfer/both.

Step 4: The Judge may also require the applicant to sign an Indemnity Bond to secure the entitled persons. This Bond may also require a Surety or some other security. That'll ensure no possible loss arises out of the use or misuse of such certificate.

6) The validity of the Certificate

The succession certificate is valid throughout India. For a resident of a foreign country, a certificate may be granted. Provided it has been approved by an Indian representative, accredited to that State (as appointed by the government). of such foreign country. And it must be stamped in accordance with the Court Fees Act 1870 to have the same effect in India.

The applicant cannot be a minor. However, the succession certificate can be granted to a minor through a guardian.

8) What if more than one application has been filed?

When more than one application has been filed, the judge will decide whom to issue the certificate. He will take into consideration, the interests presented by the applicants. The reasons provided and the supportive documents would be considered.

9) What if some Debts/Securities were left out?

As per Section 376, the succession certificate can be extended for any debt or security not originally specified. If such extension/amendment is ordered, it shall have the same effect as the original certificate. The District Judge would extend, on an application by the holder/grantee and not of any other person.

A Succession Certificate is necessary, but may not be always sufficient, to release the assets of the deceased. 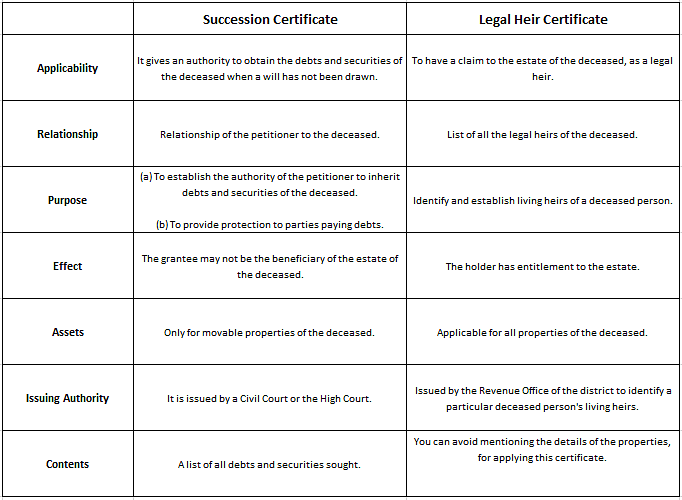 Under the Indian legal system, the property is divided amongst the heirs, as per the religion of the deceased. The laws of the Religion will be applicable in case of Intestate Death. Otherwise, a valid will supersedes the succession rights as per religion.

If a Male Hindu dies intestate:

When a Hindu female dies intestate, her property would devolve as below:

Many cases occur when a Hindu Female has inherited property from her parents. In that case, if she has no children, the property shall devolve upon the heirs of her father. The term children here include children of any predeceased son or daughter. However, if a property is inherited from in-laws, it shall go to the in-laws’ heirs. In case of absence of children or grandchildren.

The property of a Hindu Joint Family devolves by survivorship. If the Karta dies, the property devolves upon the surviving members up to four generations. Here the property will not devolve according to the Hindu Succession Act, regardless of the fact that the heirs are Hindu.

But a Class I relative may make a claim on a share of the property. In such a case, the property would devolve upon the claimant as per the Hindu Succession Act.

The property is considered after the payment of funeral expenses and debts.

The remaining property is the legal right of his heirs after his death.

The Qazi (judge ruling according to Islamic religious law) considers the burial expenses. Makes a list of the assets of the deceased that need to be distributed among wife and children.

Moreover, agricultural land has been kept outside the Shariat Act, 1937. Hence, the succession to it continues to be governed by Local Tenancy Law.

Besides, when the marriage of the deceased was solemnized under the Special Marriage Act, 1954. Then the rules of Muslim personal law cease to apply, towards the succession.

Any property, insofar as he is an Indian Christian, shall devolve as per the rules contained in Chapter II of the Act.

12) A few more points about the Certificate

The essential purpose of this certificate has been to provide protection to all parties paying debts. When these payments have been made in good faith. The grantee also has powers to receive any interest/dividend on the securities and negotiate or transfer them. Thus any payments made to and by the grantee on behalf of the deceased person are legally valid.

The Grantee has the right to:

The Succession Certificate affirms that there has been no will. And denotes the legal heirs of the deceased. The beneficiary will, additionally, carry with him the full responsibility and liability of honoring any debt or security attached to that particular property.

Sometimes, the bank only asks for it in case another legal heir is contesting the nominees claim. On the other hand, if the matter goes to the court, it will be necessary. It isn’t the aptest document in case of properties. For this, a letter of administration would be required. A letter of administration is an explicit document granting a person the authority to administer the property of the deceased. The procedure to get this document is the same as the procedure for getting the succession certificate.

The article has been written by Reema, in the capacity of a content writer with LegalRaasta. India's top portal for professional help related to legal, finance and business such as ITR filing, Company Registration, GST registration, etc.