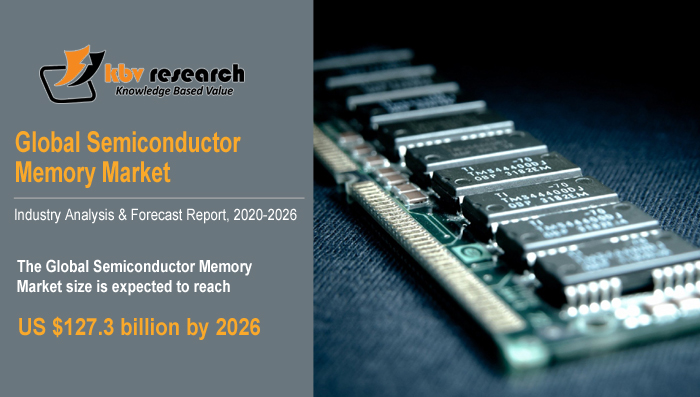 What is semiconductor memory?

Semiconductor memory is a digital electronic semiconductor system used for digital storage of data, such as computer memory. Usually refers to MOS memory, where data is stored in a metal–oxide–semiconductor (MOS) memory cell on a silicon integrated circuit memory chip. Several different styles use various semiconductor technologies. Many types of semiconductor memory have a random access property, which ensures that access to any memory location takes the same amount of time so that data can be accessed easily in any random order.

It differs from data storage devices such as hard disks and CDs that read and write data consecutively, meaning the data can only be retrieved in the same order as that written. Semiconductor memory often has much quicker access times than other forms of data storage; byte data can be written to or read from semiconductor memory within a few nanoseconds, while the access time for rotating storage is within milliseconds.

As a result, this type of semiconductor memory technology is commonly used to store programs and data that must survive when a computer or processor is shut down. For instance, the computer's BIOS will be stored in the ROM. As the name implies, the data can not be written easily to the ROM. Depending on the technology used in the ROM, writing data to the ROM may initially require special hardware. While it is always possible to change the data, this advantage involves special equipment to remove the data ready for new data to be entered.

The growing need for quick booting in modern vehicles by the use of infotainment systems and engine control is contributing to the success of NOR flash in the global market. The launch of next-generation instrument clusters that allow the display of HD content and stream music/video would lead to the need for DRAM, NAND, and NOR memory on the market.

The proliferation of smartphones is the key factor to fuel global sizes of consumer electronics. The demand will also be driven by technological breakthroughs, the development of 3G and 4G technology, and innovation. Due to several new technological developments, the industry has evolved considerably over the last few years. Over the years to come, the proliferation of technology and the development of intelligent devices will be the key driving factor for growth.

The increased demand for large-screen smartphones, called phablets provides significant opportunities for expansion. Advances such as the development of IoT over appliances such as fitness bands increased consumer disposable income, and increasing popularity of intelligent appliances provides opportunities for the industry to grow. It is expected that the development of newly developed devices, along with 3G/4G, will boost demand. For personal electronics suppliers and producers, the industry offers ample opportunities to harness consumer conduct or intentions and to develop trends as a leader. Increased BYOD industry penetration provides growth avenues.

At this pace, it is simple to say that technological advances, especially in semiconductor technology, have given rise to many successful developments and applications in medicine. The use of semiconductors in medicine has now replaced manually operated procedures with more technically accurate instruments. As a result, the field of medicine is increasingly equipped with mechanisms that make it possible to diagnose and treat initially untreated diseases with the use of more advanced, semiconductor-enabled technologies.

Evolution in the form of automation and digitization in the entire electronics sector, together with the use of memory-based elements in technologically advanced products in several vertical industries, such as automobiles, IT and telecommunications, consumer electronics, etc., are boosting the market growth. The evolving use of semiconductor components, for example, NAND Flash, DRAM, and other in electronic and automotive systems is the main source of demand for integrated gadgets and chips.

Automotive frameworks such as automated safety, luxury, and control frameworks, which consolidate different storage systems, will enhance the speed and network in the self-regulation and electric vehicle industry. Furthermore, the extensive utilization of cell phones, workstations, smart devices, and consumer electronic gadgets around the globe is a sign of the need for exceptionally productive chips.