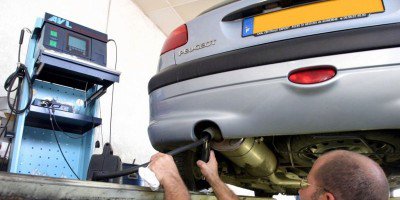 “Everyone Is Doing It”: How Carmakers Manipulate Emissions Test Results

With Germany’s largest company by revenue, Volkswagen, deep in damage recovery mode, and the market still unable to decide just how systemic and profound the fallout will be from the emissions scandal which has already cost the job of VW’s CEO and which according to some will impact the GDP of Hungary and the Czech republic as much as -1.5%, many are still trying to determine not if but how many other companies – whether “clean diesel” focused or otherwise – will be impacted by the crackdown on emissions fraud.

We don’t know the answer suffice to speculate that it will be “many” for one simpler reason: there are dozens of ways to manipulate emissions tests in both the lab and on the road, and with the temptation to “reduce” emissions all too great for management teams laser-focused on boosting profit margins, one can be certain that in this particular case not only is there more than one cockroach, there are dozens.

The chart below from Transport and Environment shows some of the traditional ways in which carmakers manipulate CO2 emissions tests to make their cars appear more efficient: 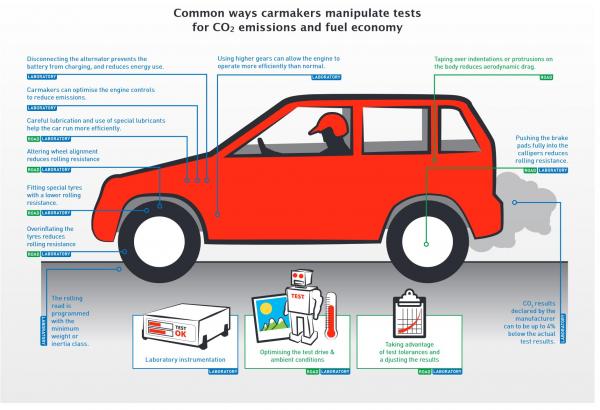 Worse, according to a follow-up report, it is only a matter of time before far more widespread crackdowns take place within the auto industry where emissions fraud now appears as systemic as that of the global banking sector.

As reported earlier this week, the gap between official test results for CO2 emissions/fuel economy and real-world performance has increased to 40% on average in 2014 from 8% in 2001, according to T&E’s 2015 Mind the Gap report, which analyses on-the-road fuel consumption by motorists and highlights the abuses by carmakers of the current tests and the failure of EU regulators to close loopholes. T&E said the gap has become a chasm and, without action, will likely grow to 50% on average by 2020.

By exploiting loopholes in the test procedure (including known differences between real-world driving and lab simulations) conventional cars can emit up to 40-45% more CO2 emissions on the road than what is measured in the lab. But the average gap between test results and real-world driving is more than 50% for some models. Mercedes cars have an average gap between test and real-world performance of 48% and their new A, C and E class models have a difference of over 50%. The BMW 5 series and Peugeot 308 are just below 50%. The causes of these big deviations have to be clarified as soon as possible.

Greg Archer, clean vehicles manager at T&E, said: “Like the air pollution test, the European system of testing cars to measure fuel economy and CO2 emissions is utterly discredited. The Volkswagen scandal was just the tip of the iceberg and what lies beneath is widespread abuse by carmakers of testing rules enabling cars to swallow more than 50% more fuel than is claimed.”

Greg Archer concluded: “This widening gap casts more doubt on how carmakers trick their customers in Europe to produce much better fuel efficiency in tests than can be achieved on the road. The only solution is a comprehensive investigation into both air pollution and fuel economy tests and all car manufacturers to identify whether unfair and illegal practices, like defeat devices, may be in use. There must also be a comprehensive overhaul of the testing system.”

Who are the biggest European culprits. 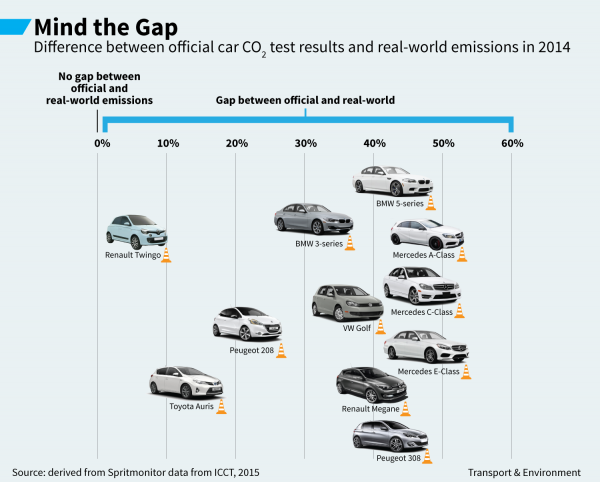 Now multiply that by tens of millions of cars and you get a sense of the potential industry liability, especially since can be absolutely certain Europe’s US carmaking peers are just as guilty of emissions manipulation.