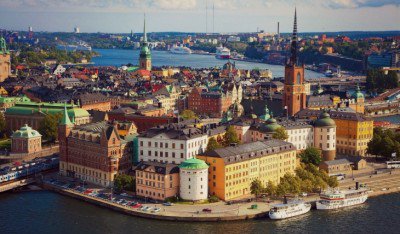 Powered by Sweden plans to become one of the first nations in the world to thrive on 100% renewable energy.

There are quite a few things to love about Sweden. Not only is the eco-conscious nation considering implementing a ‘meat tax’ to reduce its carbon footprint, the country has literally run out of trash to incinerate for energy and, therefore, must import garbage from its neighbors.

And now, as The Ecologist reports, Sweden seeks to become one of the first nations in the world to thrive completely on renewable energy.

Sweden announced last month that the nation will be spending an extra $546 million (£360 million) on renewable energy and climate change action, beginning with their 2016 budget. The nation’s ultimate aim is to become one of the world’s first nations to end its dependence on fossil fuels. Solar energy, in particular, has seen a budget increase by 800%.

The admirable goal does not yet have its own timetable, but the Swedish government announced that its capital of Stockholm aims to be powered only bysustainable energy sources by 2050.

“Sweden will become one of the first fossil-free welfare states in the world,”Prime Minister Stefan Löfven told the press. “When European regulations do not go far enough Sweden will lead the way.”

Science Alert notes that while the goal may seem incredibly ambitious, the Scandinavian country already obtains two-thirds of its electricity from non-fossil fuel energy sources – predominantly hydroelectric and nuclear. It will now be focusing on increasing its solar and wind energy potential, as well as making its transport industry more sustainable. The majority of the budget increase will be financed by heavier taxes on petrol and diesel fuel.

Sweden is also closing its nuclear power plants, although this is mainly due to their aging infrastructure. No replacements are presently planned, with the government intending to use only renewable energy sources. IFLScience points out that nuclear power plants are often lumped together with fossil fuel power plants as being just as harmful to the environment, but, surprisingly, actually have a negligible carbon footprint more in line with renewables. Nonetheless, Sweden’s government is preparing to phase them out.

The government also announced it will be spending more money on:

The announcement couldn’t come soon enough, with the 2015 United Nationals Climate Change Conference being held in Paris in November. Key adviser to the Prime Minister, Johan Rockström, said in a press briefing:

“2015 is our opportunity, a chance to, in dialogue with all the countries of the world, change course towards a new development path where we can succeed in generating welfare for all, not at the planet’s cost but in cooperation with it.”

When the event takes place in November, Sweden and Denmark aim to influence the less keen attendees of the conference to begin to adapt their own countries’ energy grids.

Fortunately, Sweden is just one of many governments around the world opting to shift toward renewables. A few months ago, Hawaii announced its plans to become the first US state totally powered by renewable energy and Costa Rica was powered with 100 percent renewable energy for 75 days this year. Denmark, one spectacularly windy day in July, generated 140% of the nation’s electricity demand through wind power alone.

Indeed, the future looks green, and it’s activists like you who are making the difference by urging your governments to change.