Technological advancements are a significant growth factor for the global physical vapor deposition (PVD) industry. The increasing need for highly sophisticated surface-related properties such as super-plasticity, magnetic, optical, electronic and catalytic properties, advanced mono-structured coatings also contributes to the growth of this market. The rising performance and environmental benefits provided by these coatings are combined with the fast-growing manufacturing sector in developing markets. 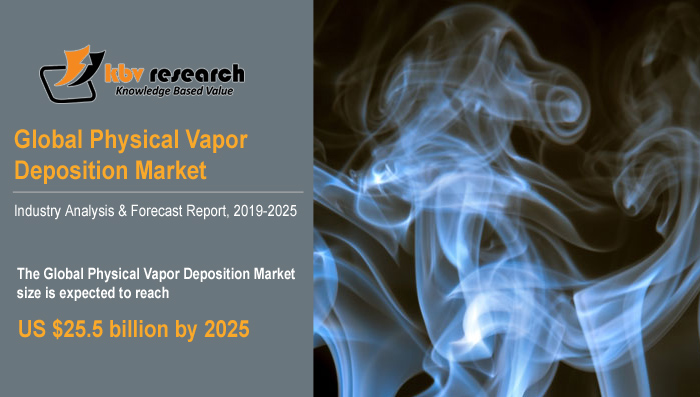 What is physical vapor deposition?

Vapor deposition is a technique used in the manufacture of thin films and coatings. It is characterized by a cycle in which the substance moves from the condensed phase to the vapor phase and back to the condensed phase of the thin film. Several products like microelectronics, storage devices, cutting tools, medical equipment, solar panels, etc. are coated with thin protective film in the coating procedure.

There are two kinds of physical vapor deposition- evaporation and sputtering. Materials that get vaporized through high temperatures, such as refractory oxide compounds and refractory metals, also need a higher temperature of the targeted electron beam source (E-B). Nearly any substance that can be evaporated by RH may be evaporated by E-B. However, the power (high voltage) of fluoride compounds must be reduced to avoid dissociation. Metals like aluminum, gold, and copper have lower evaporation temperatures as compared to dielectric and RH, which is used more commonly.

Thermal evaporation uses heating of a material to create a vapor that condenses the coating over a substrate. The heating process can be carried out by various methods, such as electrical resistance, hot filament, electron or laser beam, and electrical arc. Sputtering requires electrical plasma generation between the coating species and the substrate. Ion plating is simply a variation of thermal evaporation and sputtering.

Various use cases that have made the physical vapor deposition technology prevalent:

The accelerated demand for microelectronics in various applications, such as the automotive industry, plays a major role in driving market growth. PVD Aluminum Metallic Finish refers to the process of evaporation of aluminum coating to a non-metallic substrate. The layer must be vacuum-compatible. Tool materials, brass, glass, steel, zinc and ABS and polycarbonate plastic are most common.

PVD aluminum coating is a good alternative for applications that require very thin functional coatings. The PVD coating process deposits a layer of high-density material and that is only a few microns thick. When applied, it is hardly possible to remove the coating and do not wear it. This provides the aesthetic look of metal parts thereby lowering costs. It’s safer than any other process. Vacuum metalizing does not require the mixing of hazardous chemicals. The purest method reduces the risks of chemicals that cause human problems.

Whilst the medical device sector keeps growing rapidly, manufacturers are more prone to facing a variety of challenges if they are to distinguish products in a highly competitive market. With this in consideration, greater emphasis is placed on functional coatings applied to stainless steel, titanium and other necessary medical equipment, ranging from implants to scalpels, needle drivers, bone saws, as well as reamers.

When manufacturers first started coating tools, their primary objective was to improve instrument appearance and to enhance identification during surgery. Titanium nitride, with its easily identifiable color of gold, rapidly became the coating of choice for this purpose. Nevertheless, OEMs are now striving to move beyond aesthetics by adding titanium nitride and other revolutionary physical vapor deposition (PVD) coatings to enhance wear resistance, minimize galling between sliding parts, increase lubricity as well as help to retain sharp edges on cutting instruments.

A key supply chain focus for aircraft manufacturers has been the need for a suitable substitute for hard chrome in aerospace components. This may be attributable to observed health risks to staff and the environmental impact of exposure to hexavalent chromium. It is a carcinogen that emerges during the chromium plating process and is the most toxic type of chromium. As a result, chromium is a highly regulated chemical in major sectors of the world.

PVD defines a variety of methods of vacuum deposition that can be used to manufacture thin coatings. PVD is usually used to paint components at a relatively low coating temperature of 160-500°C (212-932°F). Such temperatures are suitable because they are below the temperature of the steels, which helps to prevent alteration of the fundamental properties of the material.

Among many of the PVD options, several carbon-based coatings will provide a rare combination of extreme surface durability, low friction, and anti-corrosion properties. For example, BALINIT C from Oerlikon Balzers, a manufacturer of coatings, has drawn the attention of some of the world's leading aerospace manufacturers, including Airbus.

The physical vapor deposition market is driven primarily by increasing demand for reliable and durable coatings in medical equipment, especially from developing economies. As a result, the application category of medical devices is projected to have a strong growth potential over the estimated time period.

Other applications for PVD may include aluminum tracks, ceramic resistors for electronic circuitry, optic coatings, plastic coatings as well as coatings to avoid wear on machines and press tools. Thin-film applications are comprehensive and can also be used where anti-corrosive, anti-fogging, stain-repellent, non-stick, electrically insulated, low friction and wear-resistant properties are needed.

PVD materials are wonderful elements that reflect people's daily lives in many ways. The process will continue to play a key role in how and why products are developed. With a nearly infinite variety of unique properties, it is always possible to imagine a whole new world of applications.