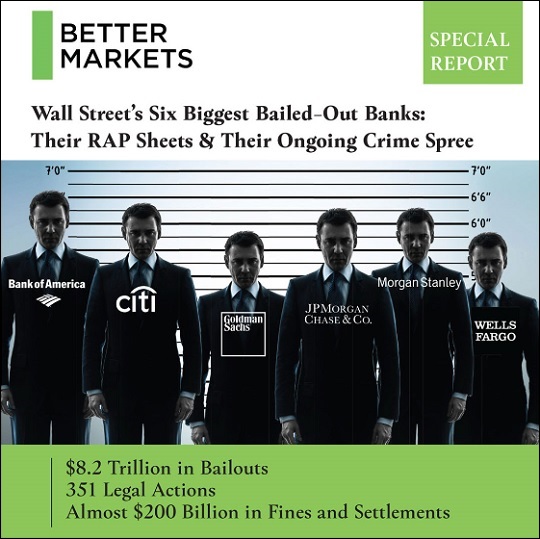 There are two opposing narratives living side by side in the United States: independent journalists and researchers have documented how the behemoth banks on Wall Street are as crooked as ever while the Federal Reserve Chairman, Jerome Powell, repeatedly tells Congress and the press that these banks are a “source of strength” in this economic crisis. (Never mind that the Fed is flooding these banks with trillions of dollars in cumulative loans at less than 1 percent interest.)

Corporate-owned mainstream media, that is dependent on financing from these same banks, prefers the Fed’s alternative version of reality.

Wall Street On Parade has repeatedly written about critical reports showing serial corruption at these banks that have been censored by those Pulitzer prize-winning media outlets. Yesterday provided another example: the New York Times refused to cover the International Consortium of Investigative Journalists’ stunning report on how five of the biggest banks on Wall Street have continued to launder dirty money for fugitives and suspected criminals. The Wall Street Journal, whose name suggests that perhaps its focus should be Wall Street, failed to put the story on its front page, opting instead to bury it under an innocuous headline about HSBC’s stock hitting a new low.

The same news blackout occurred last year when the public interest group, Better Markets, published an in-depth report on “Wall Street’s Six Biggest Bailed-Out Banks: Their RAP Sheets & ....” Three days after the report came out, major news outlets were still refusing to cover the report. We wrote this in a report three days after the study was released:

“We checked the Wall Street Journal, the New York Times, Financial Times, Bloomberg News, Reuters, CNBC, and CNN. We could find no mention of the Better Markets report. (We checked again this morning. There is still a news blackout.)

“There are four words in this outstanding report from Better Markets that rendered it unpalatable to corporate business media: ‘rap sheets’ and ‘criminal enterprise.’ We searched Bloomberg News, the Wall Street Journal, and the New York Times back to 2004 to see if at any time they had used the words ‘rap sheet’ to describe the unprecedented serial crime sprees of these Wall Street megabanks. They had not.”

Read our full report on the censorship of the Better Markets study: Research Study on Ongoing Crime Spree by Wall Street Mega Banks Get...

We are not the only outlet to have noticed the censorship of Wall Street bank crimes. When the story of Wall Street banks rigging the interest rate benchmark known as “Libor” broke, Media Matters ran this headline: ABC, NBC Evening News Shows Ignore Massive Banking Scandal For More....

On June 19 of last year, the House Financial Services Subcommittee on Investor Protection, Entrepreneurship, and Capital Markets held a hearing on “Putting Investors First: Examining Proposals to Strengthen Enforcement Against Securities Law Violators.” The hearing considered eight pieces of draft legislation to address critical gaps in protecting U.S. investors from financial fraud and make sure wrongdoers paid for their crimes.

One piece of proposed legislation came from the feisty Congresswoman Katie Porter of California. It was to be called the “Corporate Management Accountability Act of 2019.” The bill would mandate that publicly-traded companies announce their policies on whether senior executives or shareholders are to bear the cost of paying the company’s fines and penalties that are imposed by regulators for fraud and other forms of wrongdoing. The hearing received a news blackout from corporate-owned newspapers and networks.

Michael Lewis is no dummy when it comes to both Wall Street and the media. He previously worked on Wall Street at the investment bank, Salomon Brothers, and he’s sold a number of his bestselling books to Hollywood. So when it came to the book he was going to release in 2014, “Flash Boys,” which charged that the big Wall Street banks were in cahoots with the New York Stock Exchange to rig stock trading in the U.S., Lewis carefully chose where he would break the story.

Kroft then asks Lewis who it is that’s rigging the market. Lewis responds: “By a combination of these stock exchanges, the big Wall Street banks and high-frequency traders.” (Read the full transcript here.)

The outpouring of interest in the very credible Michael Lewis allegation, backed up with solid details in his book, resulted in a Senate Banking Subcommittee hearing two and one-half months after Lewis appeared on 60 Minutes. Given the explosive nature of the allegation that the most iconic names on Wall Street were conspiring with the most iconic stock exchange in the world to rig the markets, one would have expected the hearing to have been packed with top media outlets. Instead, there was a complete big media blackout of the hearing. (You can read our report on the hearing and news blackout here.)

“Flash Boys” made the most spectacular charges of any of the Lewis books. Given that he had previously sold three of his books to Hollywood and they became successful motion pictures (“The Blind Side,” “Moneyball,” and “The Big Short”), one would have expected “Flash Boys” to be quickly turned into a blockbuster motion picture. Instead, the rights were bought by Sony in 2014 and then allowed to lapse with no film made. Variety reported in May of 2018 that Netflix had picked up the rights. It’s now 2020 and we’ve yet to see any film adaptation reach the American people.

The censorship has taken multiple routes. In 2016 we reported on the censoring of parts of Senator Bernie Sanders’ speeches that talked about corruption on Wall Street. In 2014 we reported on how it was becoming next to impossible to get Federal agencies to uphold the law and provide material under the Freedom of Information Act so that we could provide transparency on Wall Street banks’ activities to the American people.

And at the New York Times, the censorship includes not just what they decline to print but also what they do print that leaves out critical facts about Wall Street corruption. For example, in April 2018, the New York Times allowed Robert Rubin, the man who played an essential role in allowing the financial collapse of the Wall Street behemoth, Citigroup, to write a memoir-style OpEd without ever mentioning his fateful role at Citigroup. Rubin was actually one of the men that the Financial Crisis Inquiry Commission referred to the U.S. Department of Justice for potential criminal charges related to his work at Citigroup.

Then there was the New York Times investigation of mandatory arbitration in 2015, which focused on every industry except Wall Street. Mandatory arbitration has closed access to the nation’s courts to millions of consumers and workers who seek redress against fraudulent practices of corporations. We wrote at the time:

“The major problem with The Times investigation is that it makes only a few fleeting references to Wall Street – the longest purveyor of a private justice system dating back decades and the only industry in America that shuttles all claims by both customers and employees into mandatory arbitration hearings. (Under the Dodd-Frank financial reform legislation passed in 2010, whistleblower claims are now exempted from mandatory arbitration agreements.)”

And, perhaps, most important, is the cheerleading role the New York Times played in helping to create the Frankenbank structure that currently exists on Wall Street today. (See our report here.)

Until Americans demand better corporate media, we will all be forced to live in their alternative reality of the dangers posed by Wall Street banks to our nation and our fellow citizens.