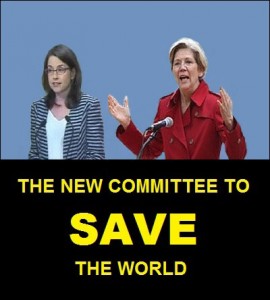 Senator Elizabeth Warren from Massachusetts is a household name in America. Kara Stein is not. But both of these women are having a seismic impact on entrenched Wall Street group-think in Washington.

Stein is one of the five Commissioners of the Securities and Exchange Commission (SEC), appointed by President Obama and sworn in just 22 months ago. Stein brought a unique set of qualifications to the SEC: from 2009 to 2013, Stein served as Staff Director of the Securities, Insurance, and Investment Subcommittee of the Senate Banking Committee. She is credited with playing a key role in drafting significant portions of the Dodd-Frank Wall Street Reform and Consumer Protection Act.

What Warren and Stein have in common are values of right and wrong that resonate deeply with the American people and the willingness to speak common sense truths that challenge the status quo thinking about Wall Street. Warren was a former law professor at Harvard; Stein has a law degree from Yale. These attributes have Wall Street in a deep sweat.

Last Wednesday, the same day that the U.S. Department of Justice announced criminal guilty pleas from two U.S. banks, Citigroup and JPMorgan Chase, and three foreign banks, RBS, Barclays and UBS, the SEC granted all five banks waivers so that they could continue business as usual. Stein wrote a dissenting opinion, effectively shaming the SEC. Noting the serial crimes these banks have been committing for years, Stein wrote:

“Allowing these institutions to continue business as usual, after multiple and serious regulatory and criminal violations, poses risks to investors and the American public that are being ignored.  It is not sufficient to look at each waiver request in a vacuum…

“It is troubling enough to consistently grant waivers for criminal misconduct. It is an order of magnitude more troubling to refuse to enforce our own explicit requirements for such waivers. This type of recidivism and repeated criminal misconduct should lead to revocations of prior waivers, not the granting of a whole new set of waivers.  We have the tools, and with the tools the responsibility, to empower those at the top of these institutions to create meaningful cultural shifts, yet we refuse to use them…I am concerned that the latest series of actions has effectively rendered criminal convictions of financial institutions largely symbolic.”

The well-controlled outrage simmering within both Warren and Stein likely originates from both being intimately involved in observing the devastating hardships suffered by their fellow citizens during the 2008-2009 collapse of the U.S. economy – the greatest downturn since the Great Depression – and then helping to create laws and structures to rein in future Wall Street abuses. Warren served as Chair of the Congressional Oversight Panel for the Troubled Asset Relief Program (TARP) and was the driving force behind the creation of the Consumer Financial Protection Bureau under Dodd-Frank, an agency still under dogged attack by Wall Street’s cronies in Congress. To see the same set of dangerous dynamics building anew on Wall Street today has both women going where few in Washington dare to go.

Looking at the themes in the speeches that Warren and Stein have delivered, there is something else that stands out: they both realize that Wall Street has a dangerous stranglehold on where America is going – economically, morally, and culturally – and understand that it is incompatible with a participatory democracy.

On March 3, the Senate Banking Committee held the first in its hearings on reforming one Wall Street regulator, the Federal Reserve. Elizabeth Warren highlighted the unprecedented and secret loans the Fed had made during the crisis:

“During the financial crisis, Congress bailed out the big banks with hundreds of billions of dollars in taxpayer money; and that’s a lot of money. But the biggest money for the biggest banks was never voted on by Congress. Instead, between 2007 and 2009, the Fed provided over $13 trillion in emergency lending to just a handful of large financial institutions. That’s nearly 20 times the amount authorized in the TARP bailout.

“Now, let’s be clear, those Fed loans were a bailout too. Nearly all the money went to too-big-to-fail institutions. For example, in one emergency lending program, the Fed put out $9 trillion and over two-thirds of the money went to just three institutions: Citigroup, Morgan Stanley and Merrill Lynch.

“Those loans were made available at rock bottom interest rates – in many cases under 1 percent. And the loans could be continuously rolled over so they were effectively available for an average of about two years.”

On April 30 of this year, Stein spoke before the U.S. Treasury Department’s Corporate Women in Finance Symposium. One of the issues she tackled in her talk is the insidious new-think that it’s appropriate for the largest corporations in America to be the largest buyers of their own stock – effectively serving as a permanent price prop while their CEOs are obscenely rewarded for good stock performance. Outlining her concerns that this practice could shortchange investments in “research and development, workforce training, and other investments that lead to new innovation, higher productivity, and future growth, Stein stated:

“Recently, many observers have brought up the issue of short-termism in the context of stock buybacks, which I’d like to spend some time discussing. Many have highlighted the fact that companies are using their cash resources to buy back shares at record numbers, instead of investing in longer-term projects. In fact, stock buybacks have become a significant use of cash by some of the nation’s largest companies. In 2004, companies announced plans to repurchase $230 billion in their own stock. Last year, total shareholder payouts (including $350 billion in dividends and $553 billion in buybacks) amounted to 95 percent of the companies’ profits, up from 88 percent and 72 percent the two years previous. Companies are on track this year to spend over 100 percent of their corporate earnings on total payouts. Over the last decade, 90 percent of the companies in the S&P 500 index bought back their own stock, using over $3.4 trillion to do so.”

(To fully grasp what is happening in this arena, Stein should investigate the corporate purchases of their own stock being made in Wall Street’s dark pools. If ever there was an area ripe for abuse, this is it.)

Warren has recently stepped up her demands for finishing the job of reforming Wall Street. On April 15, at the Levy Institute, Warren called for restoring the Glass-Steagall Act that would separate FDIC insured banks from the high-risk investment banks and shredded the simple-minded notion among some in Congress that free markets don’t require government regulations. Warren said:

“The moral of this story is simple: without basic government regulation, financial markets don’t work. That’s worth repeating: without some basic rules and accountability, financial markets don’t work.  People get ripped off, risk-taking explodes, and the markets blow up. That’s just an empirical fact – clearly observable in 1929 and again in 2008.”

In the same speech, Warren called out the Justice Department and the SEC, stating:

“Today, the Department of Justice doesn’t take big financial institutions to trial – ever – even when financial institutions engage in blatantly criminal activity.  Instead, DOJ uses what it calls deferred prosecution agreements and non-prosecution agreements, in which it asks the offending firm to pay a fine and to work with the government to come up with a plan for doing better in the future.  These kinds of agreements were originally created to deal with low-level, non-violent individual offenders, but they have now been transformed beyond recognition to create get-out-of-jail-free cards for the biggest corporations in the world.

“The SEC is even worse.  The SEC rarely takes any big institutions to trial, and it also fails to use other tools in its enforcement toolbox. For example, the SEC grants the status of ‘Well-Known Seasoned Issuer’ to certain companies that it believes are uniquely trustworthy. That status allows these companies to access the capital markets more easily. By law, the SEC is supposed to revoke this privilege if a company receives a criminal conviction or violates the anti-fraud provisions of the federal securities laws. But more often than not, the SEC waives this automatic revocation, and passes up yet another opportunity to meaningfully deter future misconduct.”

There are 535 members of Congress, many of whom have their campaigns financed by Wall Street firms. There are hundreds of executives at the Wall Street regulators – many waiting their chance to grab a multi-million dollar compensation package on Wall Street. The strident protestations of Warren and Stein aren’t likely to change this dynamic immediately – but it’s a critical beginning. As Margaret Mead correctly noted: “Never doubt that a small group of thoughtful, committed citizens can change the world; indeed, it’s the only thing that ever has.”