It’s been called the Great Resignation, the Great Attrition and the Big Quit. It began at the beginning of the COVID-19 pandemic and, according to latest findings, is showing no sign of stopping.

Official statistics show that despite a growing global economic crisis, workers are continuing to leave - or at least considering leaving - their jobs. More than 4 million people in the US quit their jobs in June. Almost 11 million job vacancies remain unfilled, according to the US Bureau of Labor Statistics. There are almost 900,000 unfilled job openings in Japan, with a jobs-to-applications ratio of 1.27. In the UK, there are now more available job openings than unemployed people for the first time since records began. And in the European Union, an average of almost 3% of jobs remain unfilled. 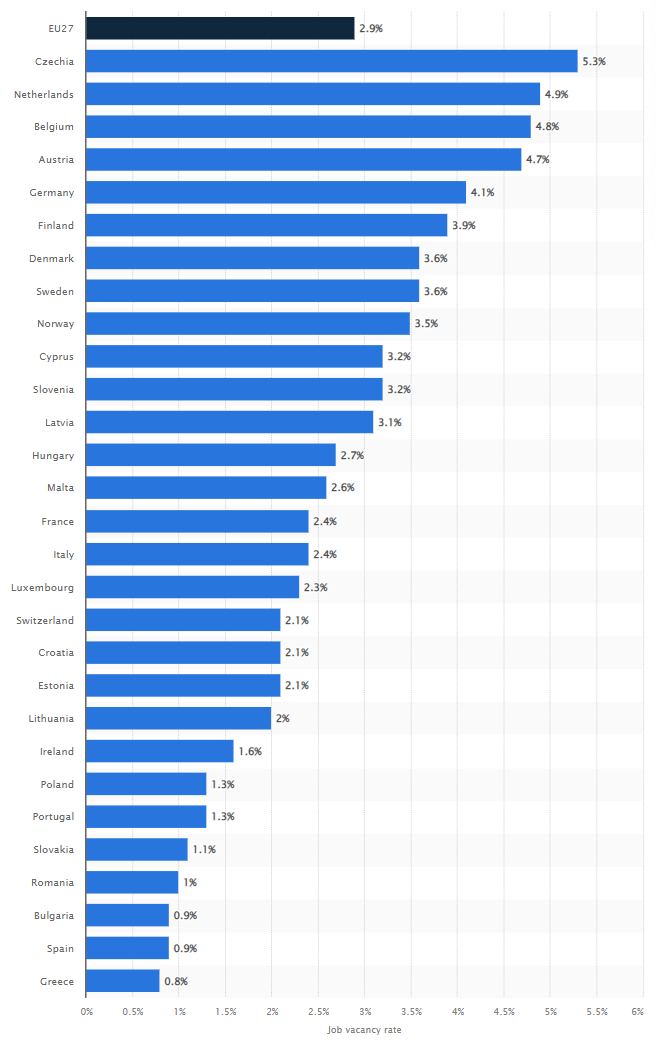 Almost 3% of job positions in the EU remained unfilled in the first quarter of 2022. Image: Statista

Is the Great Resignation here to stay?

A new survey from US management consultants McKinsey suggests the Great Resignation isn’t going away anytime soon. It found that 40% of people surveyed in six countries are unhappy at work and are considering leaving their job in the near future. That’s two out of five employees thinking about leaving in the next three to six months.

Of the six countries surveyed, India was strikingly ahead of the rest, with 66% planning to leave their jobs.

It isn’t just better remuneration that’s driving the global surge, according to the survey: 41% of people in the US, Canada, the UK, Australia, India and Singapore said a lack of prospects for upward mobility was the main reason they had resigned from a job. 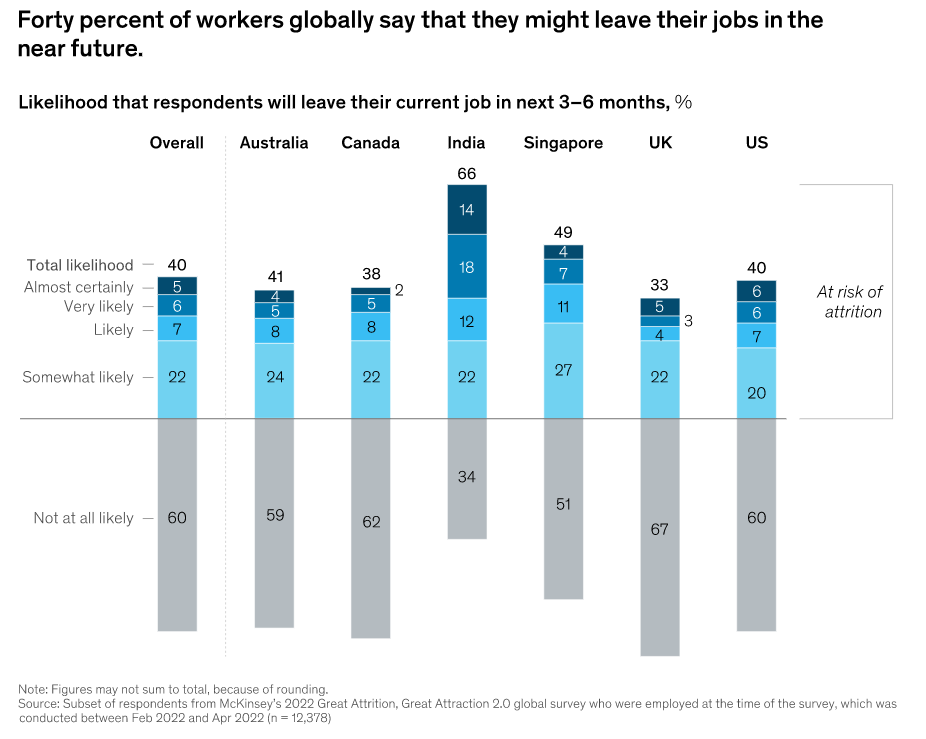 Two-thirds of respondents in India are planning to quit their jobs in 2022. Image: McKinsey

Inadequate pay came second on the list, but other significant factors included: uncaring or uninspiring leaders, work not being meaningful, unsustainable expectations, inadequate workplace flexibility and a lack of support for health or wellbeing.

The report authors say this suggests that the world of work may have changed for ever: “It’s the quitting trend that just won’t quit. People are switching jobs and industries, moving from traditional to non-traditional roles, retiring early, or starting their own businesses. They are taking a time-out to tend to their personal lives or embarking on sabbaticals. The Great Attrition has become the Great Renegotiation.”

McKinsey’s findings echo those in a recent survey carried out by consultancy firm PwC. It contacted 52,000 workers in 44 countries and territories and found that one in five plan to quit in 2022. PwC’s study also found that remuneration aside, work flexibility has become increasingly important to people. More than a quarter said they would like to work remotely full-time. However, only 18% said that their employer is likely to allow that to happen. 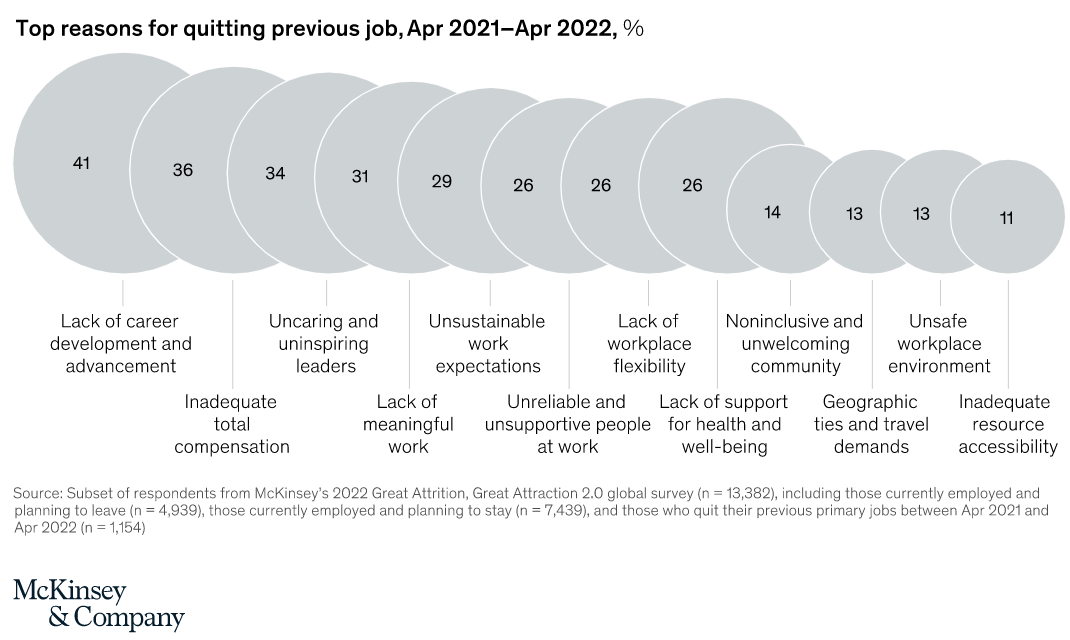 Lack of career development is one of the main reasons people are quitting their jobs.

How to stop the jobs churn

The McKinsey report offers some insights as to how employers can navigate what it calls the new playing field of the job market. It says companies should focus more on compensation and benefits, ensuring career development and, crucially, making sure leaders inspire staff. To keep and attract a new generation of workers, McKinsey says a “non-traditional value proposition” must be built. This should revolve around flexibility, mental wellbeing and behavioural-health benefits, and a strong and meaningful company culture to make jobs more “sticky”. Talent-sourcing approaches should also be broadened so they are tailored towards different types of workers.

The authors conclude: “It cannot be overstated just how influential a bad boss can be in causing people to leave. And while in the past an attractive salary could keep people in a job despite a bad boss, that is much less true now than it was before the pandemic. Our survey shows that uncaring and uninspiring leaders are a big part of why people left their jobs, along with a lack of career development. Flexibility, on the other hand, is a top motivator and reason for staying.”

PwC also advises that companies “must tailor their workforce strategy to the unique needs of their workers” if they are to succeed in today’s challenging environment.

What is the Forum doing about keeping workers well?

The views expressed in this article are those of the author alone and not the World Economic Forum.