Fire detection and alarm systems have emerged as a new light for the fire safety community. Fire protection engineers, fire officials, and building owners have obtained a new appreciation for the cost-effective role fire alarm systems play in protecting buildings and their residents from fire. Recent advancements in fire alarms technologies include human sensitivity adjustment for smoke detectors,

Recent technological advancements in fire detectors include modification of the sensitivity of the individual smoke detector, compensation for drift, and notification required for maintenance. These features minimize these systems' nuisance warnings, while at the same time shortening the time alerts are required to detect real fires. Innovation in the fire alarm system technology has been slow in comparison to other smart devices with high demand. 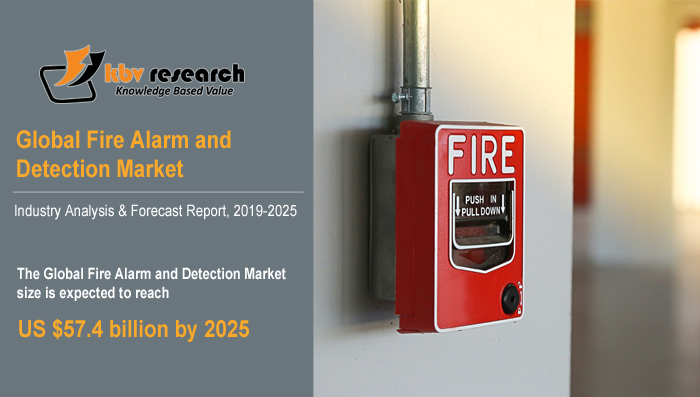 What are the fire alarm and detection technology?

Fire detectors are designed to detect one or more of the three fire-smoke, heat, and flame properties. Further than this, any fire warning device must have manual call points (break glass), so that it can be of immediate help in the case of a fire.

The Fire Alarm System is programmed to alert us of an emergency, and we can take measures to protect ourselves, staff and the general public. Fire alarms are used in schools, warehouses, and public buildings, they are part of our everyday life, but they are still ignored before an emergency happens at which point they could just save our lives.

Types of technologies provided through this industry:

Smoke detectors are stored in plastic enclosures, smoke detectors are usually shaped like a disk or square about 150 mm in diameter and 25 mm thick, although shape and size vary. Smoke can either be detected optically (photoelectric) or by physical process (ionization); detectors can use one type or both. Sensitive alarms may be used to detect smoking, and therefore discourage it, in places where it is forbidden. Smoke alarms are typically powered by a central fire alarm device in large commercial, industrial, and residential buildings, and is operated by the building power with a battery backup.

A flame detector is a sensor designed to detect and respond to the presence of a flame or fire, which enables the detection of flames. Responses to a detected flame depend on the system, which may include sounding an alarm, deactivating a line of fuel (such as a propane or a line of natural gas), and activating a fire suppression. When used in applications such as industrial furnaces, their role is to assure that the furnace is operating properly; in such situations, no further action is taken besides notifying the operator or control device. A flame detector can also respond faster and more accurately than a smoke or heat detector because of the flame detection mechanisms it uses.

A heat detector is a fire alarm system designed to respond when a fire's conveyed thermal energy raises heat-sensitive element temperature. The element's thermal mass and conductivity control the heat rate influx into the element. Both heat detectors experience this thermal lag. Heat detectors have two primary working classifications, "rate of rising" and "fixed temperature." The heat detector is used to help in property damage prevention. As temperature changes, it is triggered.

It is the most prevalent form of heat detector. Fixed temperature detectors operate when the heat-sensitive eutectic alloy reaches the eutectic point which shifts from a solid to a liquid state. The thermal lag slows the accumulation of heat in the sensitive part so that a fixed-temperature system reaches its operating temperature sometime after the surrounding air temperature exceeds that. For electrically linked heat detectors the most common fixed temperature level is 58°C (136.4°F). Technological advances have enabled detectors to be developed that activate at a temperature of 47 ° C (117 ° F), improving the reaction time and protection margin available.

Audible alarms create a loud noise to alert a safety hazard to staff and other surrounding individuals, announce an incident such as a shift change, page employees, or broadcast alerts. These are found in commercial applications of compatible surveillance systems, intercom systems, or fire alarm systems.

Manual Call Point is an alert initiation device for manual initialization. Usually, manual fire alarm triggering is accomplished by using a pull station or call point, which then sounds the evacuation alarm for the corresponding building or zone.

Ongoing trends in the fire alarm and detection industry:

Both detectors are attached to a central controller in a central alarm network and transmit the signal directly to that controller. The controller continuously tracks several locations and it activates warning devices such as alarms, strobe lights, and speakers as it receives sensor data from the monitoring systems to alert the occupants. Today more and more integrated and intelligent features are coming to central alarm and evacuation systems as well.

Collisions can't be prevented entirely, even with the latest available technology, but more can be done to mitigate the damage and save human lives. Connected products and technologies such as smart detectors, alarms, and notification systems will allow easily gathering critical alerts and preparing emergency scenarios better. Users will evaluate these connected technologies and implement them to improve safety.

While safety technology has gone a long way, technology alone is not enough, and possibly will never be. Often, disasters occur not due to faulty equipment or lack of appropriate infrastructure, but due to lack of proper implementation and poor planning. If the technology is properly implemented and managed, the deployment of advanced security technology does not help improve protection. Relevant regulations, policies, and procedures should be in effect and must be rigidly adhered to.