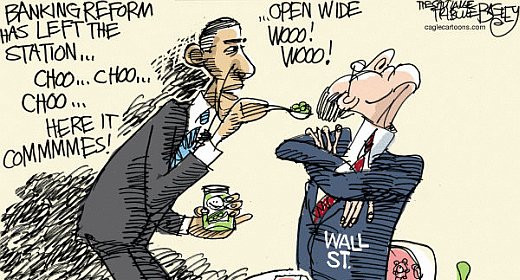 President Donald Trump signed executive directives on Friday initiating a sweeping rollback of regulations on banks and financial brokers enacted under the Obama administration following the Wall Street crash of 2008.

Trump’s actions target in particular the 2010 Dodd-Frank bank regulations and a Labor Department rule set to take effect in April requiring financial advisers to put the interests of retired clients before their own monetary rewards.

The billionaire president seemed to flaunt his promotion of Wall Street’s interests, signing the two measures after meeting in the White House with his business council. The council is chaired by Stephen A. Schwarzman, the multi-billionaire chief executive of the private equity giant Blackstone Group.

Among the dozen or so corporate executives in attendance were Jamie Dimon, another billionaire, who heads JPMorgan Chase, the largest US bank, and Laurence D. Fink, the mega-millionaire chief of the investment firm BlackRock.

“We expect to be cutting a lot out of Dodd-Frank because frankly, I have so many people, friends of mine that had nice businesses, they can’t borrow money,” Trump said during his meeting with the corporate bosses. He praised Dimon, who has bitterly campaigned against the Dodd-Frank law. JP Morgan Chase was fined billions of dollars in the aftermath of the 2008 crisis for multiple violations of bank regulations and laws, including fraudulent sub-prime mortgage deals that contributed to the collapse of the US housing market in 2007. A frequent visitor to the Obama White House, Dimon was for a time known as “Obama’s favorite banker.”

“There’s nobody better to tell me about Dodd-Frank than Jamie,” Trump declared.

Nothing could more clearly expose the farce of Trump’s pretensions to be a champion of the American worker.

Wall Street celebrated the attack on financial regulations with a stock buying spree focused on bank and financial shares. The biggest winners were JPMorgan, Goldman Sachs and Visa on a day that saw the Dow surge 186 points to recoup recent losses. It closed once again above the 20,000 mark, ending at 20,071. The Standard & Poor’s 500 and Nasdaq indexes also recorded big gains, with the Nasdaq ending the trading session in record territory.

Trump’s assault on bank regulations is of a piece with his moves to gut all legal and regulatory restrictions on corporate profit-making. Since taking office two weeks ago, he has signed executive orders mandating the lifting of regulations across the board, removed obstacles to the construction of the Keystone and Dakota Access oil pipelines, and picked long-time opponents of the Environmental Protection Agency, occupational health and safety rules, and limitations on industrial and mining pollution to head the federal agencies tasked with overseeing these activities.

The White House economic program—including sharp tax cuts for corporations and the wealthy, an infrastructure program that amounts to a tax windfall for private investors, a hiring freeze for federal workers, and historic cuts in social programs such as Medicaid, Medicare and Social Security—is the fulfillment of the wish list of America’s financial oligarchy.

Trump and his aides have denounced the 2010 Dodd-Frank law as a “disaster” and an “overreach” of government authority, and they have questioned its constitutionality. In fact, it is a largely token measure passed mainly to provide political cover for Obama’s multi-trillion-dollar bailout of Wall Street and the financial elite.

Under Obama, not a single leading banker was prosecuted for the criminal activities that led to the biggest financial disaster and deepest slump since the 1930s, destroying the jobs, life savings and living standards of tens of millions of workers in the US and around the world.

Despite the minimal restraints imposed by Dodd-Frank, during the Obama years bank profits soared, the wealth of the richest 400 Americans increased from $1.57 trillion to $2.4 trillion, the Dow rose by 148 percent, and the concentration of income and wealth in the hands of the top 10 percent, and above all the top 1 percent and 0.01 percent, reached historically unprecedented levels.

But the financial oligarchy, whose grip on the country increased under Obama, will brook not even minor limitations on its “right” to plunder the American and world economy. The Obama years paved the way for the emergence, in the Trump administration, of a government that embodies the oligarchy not only in its policies, but also in its personnel, beginning with the billionaire real estate speculator and reality TV star at its head.

Besides Trump, at least three multi-billionaires will occupy high posts in the administration, including Wilbur Ross, Betsy DeVos and Carl Icahn. Mega-millionaires will include Stephen Mnuchin, Rex Tillerson, Andrew Puzder, Elaine Chao and Gary Cohn, who gave up his number two post as president of Goldman Sachs to become the director of Trump’s National Economic Council.

Overseeing Wall Street as head of the Securities and Exchange Commission will be the longtime lawyer for Goldman Sachs, Jay Clayton. In addition to Cohn, other Goldman alumni include Mnuchin and Trump’s top political adviser, Stephen Bannon.

On Friday, Cohn told Bloomberg Television, “We’re going to attack all aspects of Dodd-Frank.” He absurdly accused the law of “shackling” US banks.

The White House could do “quite a bit” on its own, he said, while making clear that the administration would work with the Republican-dominated Congress to finish the job of ripping up bank regulations. House Republicans are preparing to put forward a bill to replace Dodd-Frank in the coming weeks.

Cohn singled out two provisions of the Dodd-Frank law for particular attack. The first is the so-called Volcker Rule, which restricts the ability of federally insured banks to make financial bets on their own behalf, in what is known as “proprietary trading.” Such gambling, including with depositors’ money, played a major role in the collapse of the banking system in 2008. Wall Street banks, led by Goldman Sachs and JPMorgan, have pushed relentlessly for the elimination of this provision.

The second provision is the Consumer Financial Protection Bureau, a largely toothless body under the aegis of the Federal Reserve Board that is tasked with shielding the public from the depredations of the banks, credit card companies and other financial firms. Cohn indicated that the White House might demand the resignation of its director, Richard Cordray, as the first step in the bureau’s evisceration or outright elimination. “Personnel is policy,” he said.

The second action Trump signed was a memorandum instructing the labor secretary to delay implementation of the rule banning financial advisers and brokers from recommending to their retired clients more expensive investments for the purpose of generating greater returns to the advisers. A 2015 report from the Obama administration concluded that “conflicted advice” costs retirement savers $17 billion a year.

Even as Trump was issuing his executive directives on Friday, Senate Republicans were voting to repeal a rule linked to Dodd-Frank that requires oil companies to publicly disclose payments they make to governments in connection with their business operations around the world. Among those who lobbied against the Securities and Exchange rule was the new secretary of state, Rex Tillerson, in his capacity as CEO of Exxon Mobil.

This amnesty for corporate bribery and criminality reveals the essence of the Trump administration’s scorched earth campaign against business regulations.

The Democrats will do nothing to oppose these policies. Their opposition to Trump is focused on differences over US imperialist foreign policy, not opposition to his assault on the democratic and social rights of working people.

But workers looking for an alternative to the political establishment who may have entertained hopes in Trump’s promises to restore decent-paying jobs will be rapidly disabused. The realization that they have once again been conned will have socially explosive consequences.