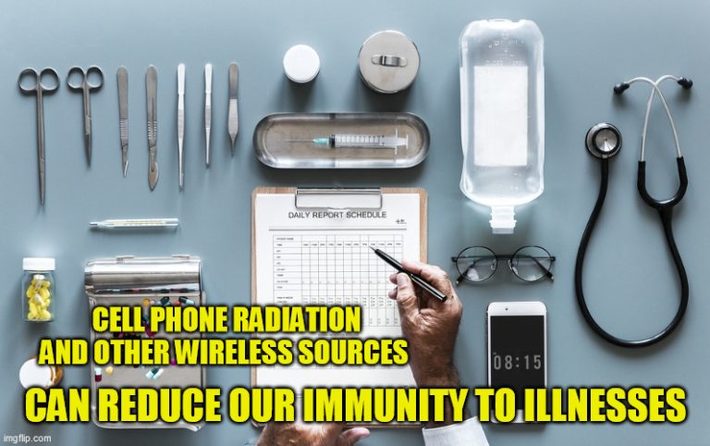 Opposition to 5G has been ongoing worldwide since long before COVID-19 came into our lives.  Since 2017 doctors and scientists have been asking for moratoriums on Earth and in space (see 1, 2) and the majority of scientists oppose deployment.  Since 2018 there have been reports of people and animals experiencing symptoms and illnesses after it was activated (see 1, 2, 3, 4).  Of course, there are health and environmental risks associated with other sources of cell phone and wireless radiation too (see 1, 2, 3).  In fact, a few months ago, a federal court ruled in favor of petitioners who sued the Federal Communications Commission (FCC) for not protecting Americans from harmful radiation exposure (see 1, 2).

Cellphone Radiation Is Harmful, But Few Want to Believe It

Thanks to the Center for Occupational and Environmental Health (COEH) for having Dr. Joel M. Moskowitz host a webinar about health risks from exposure.

97% of U.S. adults own a cellphone of some kind. The vast majority, 85%, own a smartphone. This presentation will summarize research on biologic and health effects from exposure to radio frequency radiation emitted by cell phones and cell towers. Learners will also discuss the implications of this research for 5G, the fifth generation of cellular technology. At the completion of this activity, the learner will be able to: – Describe what wireless or radio frequency (RF) radiation is, including 5G, and its relationship to ionizing radiation – Summarize the biologic and health effects caused by, or associated with, RF radiation exposure – Explain why current national and international RF radiation exposure limits fail to protect the health of humans and other species

Joel M. Moskowitz, PhD, has directed the Center for Family and Community Health in the School of Public Health at the University of California, Berkeley since 1993. Dr. Moskowitz has published research on disease prevention for 40 years. In 2009 he served as the senior author on a hallmark paper reviewing research on mobile phone use and tumor risk published in the Journal of Clinical Oncology. Last year he updated this meta-analysis in a paper published in the International Journal of Environmental Research and Public Health. This year he co-authored a paper on electrohypersensitivity published in the International Journal of Molecular Sciences.

Since 2013 he has translated and disseminated research on the biologic and health effects of wireless radiation through his website (See this). In 2017, with legal representation from the UC Berkeley Environmental Law Clinic, he won a lawsuit against the California Department of Public Health for suppressing its own scientists’ cell phone safety guidance for eight years. This resulted in the Department finally publishing cell phone health warnings. He serves as an advisor to Physicians for Safe Technology and to the International EMF Scientist Appeal which was signed by over 250 scientists who published more than 2,000 papers and letters in professional journals on electromagnetic fields and biology or health.

Cities AND entire countries have taken action to ban, delay, halt, and limit 5G installation AS WELL AS issue moratoriums due to numerous specific risks associated with this technology.