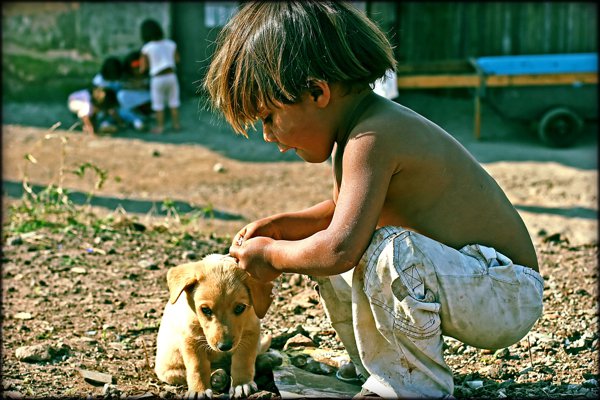 Why Universal Poverty is the Only Sensible Choice for Humanity

It's easy to show that the best course for the future of mankind is to reduce everyone in the world to poverty. To see this, examine the diagram below:

Now, first of all, we can rule out the top scenario as unacceptable. It is attractive because it eliminates poverty and inequality, but it has the major disadvantage that it will kill the earth.

Secondly, we can rule out the middle scenario because it's unequal. Any sort of structural inequality is immoral and discriminatory, and must be eliminated. Ideally, the best way to eliminate the unacceptable inequality would be to move from the middle to the top scenario (which is essentially what we are trying to do). However, as we've seen, that path is unacceptable because it is suicidal and will kill the earth.

Therefore, the only option for achieving equality without killing the earth is to reduce everyone in the world to poverty.

What really intrigues me here is the ethical reasoning. Here's another example with the same underlying structure: human life extension. I was just reading an article about Aubrey De Gray in the newspaper, and he claimed that technology will soon be developed to enable people to live to be 1000 years old. For the fun of it, let's assume that life-extension technology becomes available as an anti-aging tonic.

Now, if nobody takes the tonic, the outcome is acceptable (this corresponds to the bottom scenario – everybody living in poverty). If a small minority takes the tonic, we're still okay (i.e., the middle scenario). However, if we apply the moral principles of equality (non-discrimination) and utilitarianism, and allow everyone to use the product, the result is disaster (i.e., the top scenario).

So we end up having to choose between two alternatives: allowing a privileged minority to use the tonic, or allowing no one to use the tonic. I think a good case can be made that the middle scenario (allow only a minority to use the tonic) is better than the bottom scenario (allow no one to use it). But that's a very odd moral conclusion. (At least according to our current ethical principles.) If we allow a subset of humanity to branch off as creatures who live for 1000 years, then "Egalite!" (the cry of the French revolution) and "All men are created equal" (the cry of the American revolution) come into question.

We're instead opting for a structural system of "castes" or nobility/peasants. And if we concede that the "caste" system is better than the alternative, we're opening up a real can of worms in ethical/political theory.

On the other hand, if we reject "castes" and allow no one to use the tonic (or, in the income example, reduce everyone to poverty), then it seems we're taking refuge in Luddism and the past. It's definitely a reactionary, conservative response. And yet that too is very odd because "Egalite!" is supposed to be the revolutionary, progressive option! Here it becomes the reactionary option, while "castes" become the revolutionary and exciting new way of the future. It's very paradoxical.