Editor's Note:  If you are interested in becoming an expert on Human Resource Management (HRM), take a look at Flevy's Human Resource Management (HRM) Frameworks offering here.  This is a curated collection of best practice frameworks based on the thought leadership of leading consulting firms, academics, and recognized subject matter experts.  By learning and applying these concepts, you can stay ahead of the curve.  Full details here. 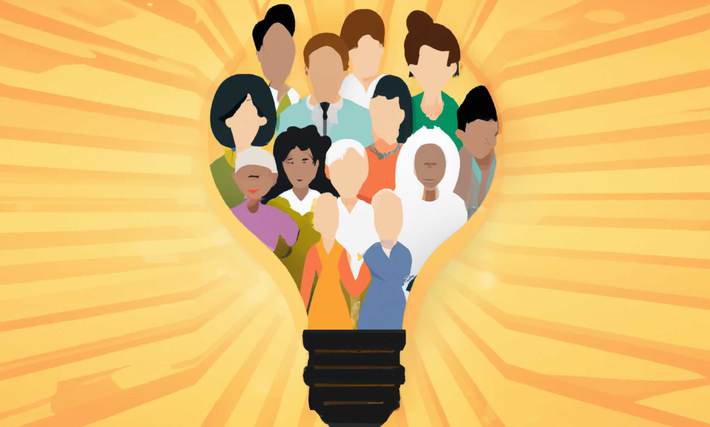 Diversity refers to the representation of races, ethnicities, and other minority groups in an organization, or its composition. Inclusion, on the other hand, refers to the degree to which the contributions, presence, and perspectives of distinct groups of individuals are valued and their level of integration into an environment.

According to a survey performed by McKinsey, a small number of organizations make a very compelling business case for D&I and are moving significantly more boldly on Diverse representation.

The study then sought to determine whether these few firms were also beginning to outpace their peers in terms of financial performance.

Firms in the top quartile for both Gender and Ethnic Diversity were predicted to outperform the rest of the companies in the data set by an extra 12%, as revealed by close examination.

Businesses in the 4th quartile of both Gender and Ethnic Diversity were predicted to underperform on profitability by 27% compared to all other businesses in the data set.

General progress on representation was discovered to be sluggish, which masked a widening chasm between leading D&I practitioners and firms that had yet to adopt Diversity.  Rising disparity between the best and worst performers indicated an increased likelihood of a performance penalty.

In the 3rd research, over 1000 significant enterprises from 15 countries and 5 continents were considered.  The research measures both Ethnic and Cultural Diversity, as well as Diversity based on Gender.

Research of firms whose success throughout the years has been measured, identified the following 5 categories, to 1 of which a firm may belong: 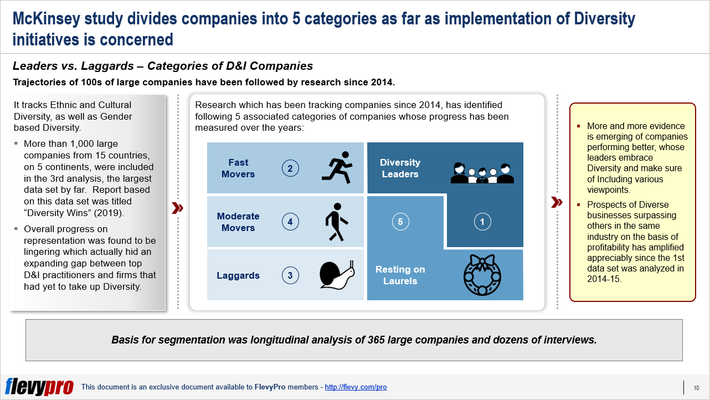 Since the 1st data set was studied in 2014-2015, the likelihood of Diverse enterprises outperforming their competitors in the same industry in terms of profitability has increased significantly.

Let's delve a bit more into a few of the categories.

Diversity Leaders are corporations that are on the verge of achieving Diversity.  These companies have done and are continuing to take meaningful initiatives towards Diversity and may achieve Gender parity.

Female Diversity Leaders made about 5% of the data set's representation.  In 2019, they had an average of 40% female executives, up from 26% in 2014, which was already a good number.

Typically, these businesses have implemented a systematic, business-led approach to D&I for at least 5 years.

The category 'Fast Movers' is comprised of organizations that have made significant development during the time of investigation.

On the opposite end of the spectrum are the Laggards.  Their already weak Diversity performance has been shown to worsen much further.

Laggards constituted 28% of the Gender and Ethnic Diversity data set.  They have decreased more during the past 5 years.

Gain the knowledge and develop the expertise to become an expert in Human Resource Management (HRM).  Our frameworks are based on the thought leadership of leading consulting firms, academics, and recognized subject matter experts.  Click here for full details.

The purpose of Human Resources (HR) is to ensure our organization achieves success through our people.  Without the right people in place—at all levels of the organization—we will never be able to execute our Strategy effectively.

This begs the question: Does your organization view HR as a support function or a strategic one?  Research shows leading organizations leverage HR as a strategic function, one that both supports and drives the organization's Strategy.  In fact, having strong HRM capabilities is a source of Competitive Advantage.

This has never been more true than right now in the Digital Age, as organizations must compete for specialized talent to drive forward their Digital Transformation Strategies.  Beyond just hiring and selection, HR also plays the critical role in retaining talent—by keeping people engaged, motivated, and happy.

Do You Find Value in This Framework?

You can download in-depth presentations on this and hundreds of similar business frameworks from the FlevyPro Library.  FlevyPro is trusted and utilized by 1000s of management consultants and corporate executives.

For even more best practices available on Flevy, have a look at our top 100 lists: