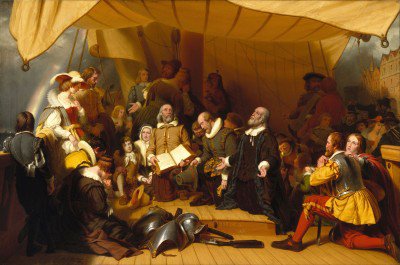 Civilization at a Standstill

In 1620, Puritans landed in Massachusetts and established the Plymouth Colony in North America. They came to America ostensibly to escape from religious persecution which was pervasive in England at the time. Apparently English Christians were unable to live together peacefully. No matter where the Puritans went to elude persecution, dissatisfaction followed. They went to Amsterdam then to Leiden before sailing to New England. In America, they routinely banished unorthodox believers. Quaker women, Roger Williams, and Anne Hutchinson are cited most often. They also executed members of their own community who were accused of witchcraft. Given how they acted, most would say the Puritans were not “nice people.” But like all whose lives are guided by a creed, the strength of their beliefs is the measure of their creed’s “truth.” The stronger the belief, the truer the creed. Consequently intolerance and discrimination are fundamental characteristics of such creedal cultures.

Forty years later, the Royal Society of London for Improving Natural Knowledge was founded. Its motto is Nullius in verba which means something like “take nobody’s word for it.” The motto expresses the determination to withstand the domination of creedal cultures and to verify all claims by appeals to facts determined by experience. The Enlightenment had dawned in England. The establishment of this society bifurcates human beings into a mass of believers and a class of knowers.

But the Enlightenment did not cast a wide beam. Believers do not need evidence to support the claims of their creeds. Even seeking such evidence exhibits “bad faith” and in the seventeenth century would have occasioned the expulsion of the seeker from the culture. Although expulsion is no longer a cultural practice, a strong belief still obviates the need for evidence to support its claims. So believers can routinely be expected to ignore anything that might cast doubt on the creed’s “truth.”

Evidence that shows that Americans and perhaps Europeans and other peoples of the world are creedal is easy to cite. Human beings are essentially incorrigibly anti-intellectual, so the Enlightenment didn’t enlighten many.

In America, ideas, practices, and policies continue to be implemented long after being discredited by experience. The War on Drugs is a notorious example. Its failure has been so evident that many states now are openly defying the federal government and legalizing the use of banned substances. But the federal government continues to ban them. American economists continue to promote free market capitalism even though it has failed to produce a single prosperous culture in more than two hundred years and has never even provided for the needs of people. Get tough on crime practices such as harsh and long prison sentences have not reduced crime; yet they continue to be utilized. The application of economic sanctions as a tool of foreign policy is another egregious example. America’s guiding principle seems to be “if at first you don’t succeed, do what you did over and over.” Getting it wrong is the American way.

This principle is so pervasive in America, even institutional groups have adopted it. The Congress and the mainstream press both have approval ratings that are shamefully low, but no one in either group has suggested doing things differently.

But there is another phenomenon taking place that’s ever worse, and it has been going on for a long time. America’s college graduates, even those who graduate from America’s elite institutions, graduate while believing the same dogmas and holding the same attitudes they held when they matriculated. Ted Cruz, the Koch brothers, and Franklin Graham are obvious examples but others are easy to cite. Apparently professors no longer (perhaps never did) make any attempt to teach students how to evaluate ideas or even the importance of doing so. Education has become merely vocational training. Any ideas taught are those which are conventionally believed. The result is that no new ideas can emerge from this culture, and human progress is impossible. Americans are trapped in trivia–entertainment, sports, baubles, bangles, trinkets, and technological toys. Some have called this an addiction to materialism, but they are wrong. The addiction is to ignorance, especially ignorance expressed as belief, and the addiction goes all the way back to 1620.

The consequence of this addiction is a political process that has been described as pendular. A group gains political power and implements seventeenth century ideas which have long been discredited by experience. When the results do not meet expectations, another group gains political power and implements nineteenth century ideas which have also been discredited by experience. The eighteenth century’s enlightenment ideas play no role in the process because they have never been adopted by any group of believers. So when the implemented nineteenth century ideas also fail to meet expectations, the only alternative available is a return to the previously discarded seventeenth century ideas. Back and forth the process goes without ever advancing. Civilization is at a standstill. No problems are ever solved and no conflicts are ever avoided. The ancient Greeks fought Persian hoards. Western nations fight Near Eastern ones. See how much more civilized human beings are today that they were in 400 B.C.E.! The more things change, the more they remain the same, because the enlightenment has gone dark. In the absence of new ideas, the dialectical process never advances, and it won’t until believers repudiate their creeds, and people see the value in the maxim, Nullius in verba. No mere claim, no matter whom it is made by, has any value.

John Kozy is a retired professor of philosophy and logic who writes on social, political, and economic issues. After serving in the U.S. Army during the Korean War, he spent 20 years as a university professor and another 20 years working as a writer. He has published a textbook in formal logic commercially, in academic journals and a small number of commercial magazines, and has written a number of guest editorials for newspapers. His on-line pieces can be found on http://www.jkozy.com/ and he can be emailed from that site’s