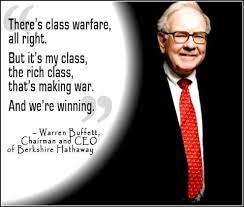 If you want to see what unrestrained parasitic financial oligarchy ultimately looks like, look no further than the humanitarian crisis in Greece turned unprecedented billionaire opportunity. With global wealth becoming systemically concentrated in the hands of “insiders,” empty flats bought for tens of millions of dollars in London and Manhattan no longer cut it. These guys have billions of dollars to burn, which means they need to start buying countries; or at least parts of countries, once they’ve been intentionally run into the ground via vulture financial colonialism.

Billionaire investor Warren Buffett has joined up with Italian real estate agent Alessandro Proto to purchase a Greek island off the coast of Athens.

Consistently ranked as one of the wealthiest men in the world, Buffett and Italian millionaire Proto, acquired the island of St Thomas for €15m last Thursday, Proto Enterprises confirmed today.

Buffett, 84, who has a net worth of around €62.4bn, and Proto plan to build a real estate development on the island, according to The Athens-Macedonian News Agency (ANA-mpa), who broke the story on Saturday.

A Proto representative told Spiegel Online, “Greece is currently very attractive for investment in the development of real estate.”

The website Public Islands Online markets Greek islands as the “ultimate status symbol, evoking images of sunglass sporting shipping magnates sipping champagne on the deck of enormous yachts. In reality, Greek islands are relatively affordable, costing as little as $2m [€1.8m] – less than a ski chalet in Aspen or a walk up on the Upper East side.”

In light of Greece’s recent economic struggles and the declining strength of the euro against the dollar and the pound, Greek real estate is being seen as an increasingly attractive investment by international investors.

Yes, they were busy plotting how best to fleece some more serfs. I’ve made my position on “Uncle Warren” very clear over the years. Here are a couple examples:

Of course, the ultimate FU to the Greek public will be when newly minted billionaire Lloyd Blankfein buys his very own Greek island. After all, Goldman Sachs played a crucial role in the entire debacle plaguing Greece. As the Washington Post noted back in 2010:

The financial tumult now unsettling Europe came to Washington on Thursday, as Federal Reserve Chairman Ben S. Bernanke said that the federal government is looking into the role U.S. banks may have played in the Greek fiscal crisis.

The Federal Reserve and Securities and Exchange Commission are seeking information about whether Goldman Sachs and other U.S. firms helped set up financial transactions over the past decade that effectively hid the amount of debt Greece was taking on. Another potential issue is whether banks and hedge funds, by taking big bets that Greece would default, are creating a self-fulfilling downward spiral for the Mediterranean nation.“

We are looking into a number of questions related to Goldman Sachs and other companies and their derivatives arrangements with Greece,” Bernanke said, testifying before the Senate banking committee.

Addressing concerns that financial firms have been engaging in trades to bet on a Greek default, Bernanke said that “using these instruments in a way that intentionally destabilizes a company or a country is counterproductive, and I’m sure the SEC will be looking into that.”

It’s not counterproductive at all you buffoon. Five years later they are buying Greek islands on the cheap. Get ready, Spain, I hear you’ve got some nice beaches.