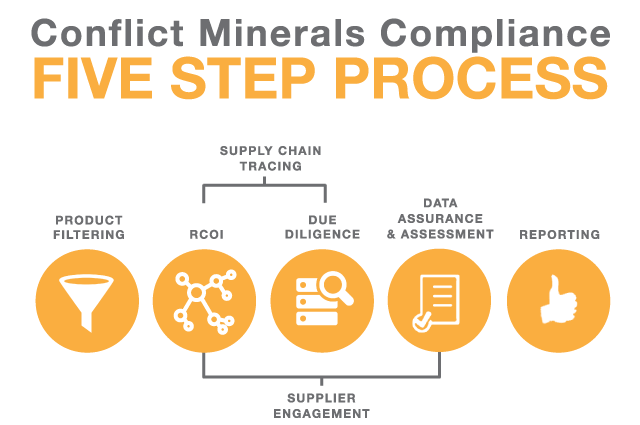 Conflict Minerals Reporting Requirement Struck Down
Received a timely Good Friday Alert from Nixon Peabody about a recent district court ruling on regulations concerning Conflict Minerals. Conflict minerals are mined in areas where conditions of armed conflict exist. The minerals, extracted with forced labor under conditions employing human rights abuse, is common in the Democratic Republic of the Congo. Rebel groups use the proceeds from the sale of conflict minerals to finance armies to enrich leaders and gain political power.
A provision in the Dodd-Frank Wall Street Reform and Consumer Protection Act required companies to publish notice that minerals acquired for use in production must be certified as being sourced from a conflict free zone. The National Association of Manufacturers brought suit against the Securities and Exchange Commission that the Conflict Mineral Disclosure provisions in the Dodd-Frank law violates the First Amendment right of free speech of corporations. The DC District Court agreed and overturned the reporting provision.
Nixon Peabody’s note makes clear that other provisions of the law still stand. Though the ruling provides relief from the reporting requirement, firms remain obligated to audit their supply chain to determine the source of conflict minerals and what economic and political interests are engaged in the sale.
The Treasury Department’s Office of Foreign Assets Control (OFAC) publishes a list of people and corporations, Specially Designated Nationals (SDN) that have been identified as affiliates of terrorist organizations, known to engage in money laundering activities. Proceeds derived from the sale of Conflict Minerals like Blood Diamonds are sources of terrorist financing and financial crime. Proceeds from the sale of Conflict Minerals underwrite black market activities relating to counterfeiting, drugs, restricted chemicals, uranium, guns and slave trading. Global Financial Intelligence Units (FIU) like Financial Action Task Force (FATF) and FInCEN oversee and enforce regulations concerning money laundering to prohibit proceeds of illicit transactions from entering the regulated economy.
Manufacturers and commodity merchants engaging in transactions involving Conflict Minerals from the Central African Republic and its surrounding countries must consult the OFAC’s SDN List, conduct PEP Checks (Politically Exposed People) and certify that source of materials, countries and banking institutions comply with the provisions concerning money laundering and reporting compliance with the Dodd-Frank law.
Though the law only lists four minerals its applications span a wide range of industry groups. The following is a list of Conflict Minerals and its applications. Source is Wikipedia.
Columbite-tantalite (or coltan, the colloquial African term) is the metal ore from which the element tantalum is extracted. Tantalum is used primarily for the production of capacitors, particularly for applications requiring high performance, a small compact format and high reliability, ranging widely from hearing aids and pacemakers, to airbags, GPS, ignition systems and anti-lock braking systems in automobiles, through to laptop computers, mobile phones, video game consoles, video cameras and digital cameras. In its carbide form, tantalum possesses significant hardness and wear resistance properties. As a result, it is used in jet engine/turbine blades, drill bits, end mills and other tools.
Cassiterite is the chief ore needed to produce tin, essential for the production of tin cans and solder on the circuit boards of electronic equipment. Tin is also commonly a component of biocides, fungicides and as tetrabutyl tin/tetraoctyl tin, an intermediate in polyvinyl chloride (PVC) and high performance paint manufacturing.
Wolframite is an important source of the element tungsten. Tungsten is a very dense metal and is frequently used for this property, such as in fishing weights, dart tips and golf club heads. Like tantalum carbide, tungsten carbide possesses hardness and wear resistance properties and is frequently used in applications like metalworking tools, drill bits and milling. Smaller amounts are used to substitute lead in "green ammunition". Minimal amounts are used in electronic devices, including the vibration mechanism of cell phones.
Gold is used in jewelry, electronics, and dental products. It is also present in some chemical compounds used in certain semiconductor manufacturing processes.
SME's with supply chain exposures need to audit its supply chain to assure compliance with the in force provisions of Dodd Frank and Treasury Department anti-money laundering provisions.
Sum2’s Credit|Redi offers managers tools to gain better insights into supply chain risk.
Sum2's also offers an AML compliance tool to screen OFAC and SDN lists.