Invasion of the Soviet Union. Analysis of the Fighting 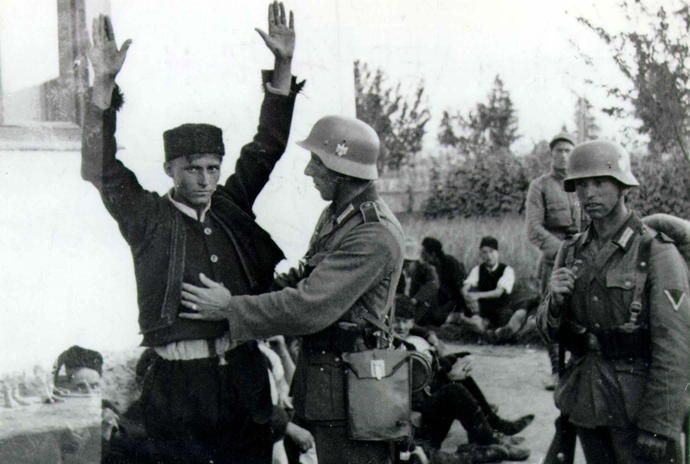 The German-led invasion of the Soviet Union began at 3:15 am, on 22 June 1941, with an enormous artillery barrage along the Nazi-Soviet frontier. The USSR’s hierarchy had counted on it being too late in the year for German forces to attack, despite warnings to the contrary.

Comprising part of the German-Soviet Nonaggression Pact, Russian deliveries of commodities to Nazi Germany continued until the final moments; the last trainload arrived into the Reich at 2 am on 22 June, which amused the onlooking German soldiers who were about to advance into the Soviet Union.

During the attack’s opening phase, much went according to plan for the invaders.

Nearly all of the bridges across the vast front were taken by the Germans intact. Many hundreds of Soviet aircraft were either shot down, destroyed on the ground, or fell undamaged into the enemy’s hands. Significant numbers of Soviet troops were on leave, while other Red Army divisions were separated from their artillery when the Wehrmacht swarmed across the border. Many Russian formations were simply overrun, and taken prisoner, before they had an opportunity to form an effective defence. In the first week of the invasion, the Soviet Army saw around 600,000 of its troops either killed, captured or wounded. 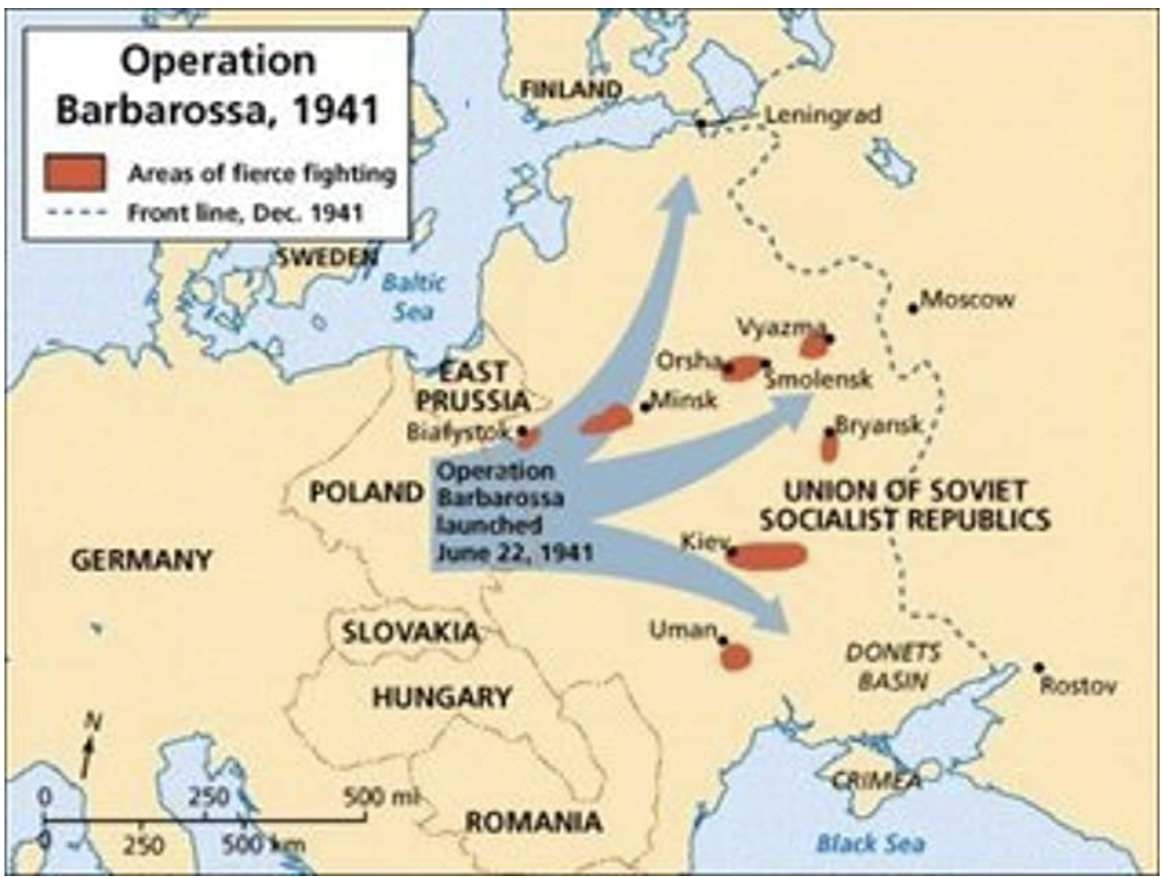 A key proponent of the Blitzkrieg (Lightning War) concept, General Heinz Guderian commanding Panzer Group 2, was concerned that the first panzer thrusts were not penetrating deeply enough. His fears seem unfounded; on the fourth day of the invasion, 25 June 1941, Army Group Centre had cut off and encircled two entire Soviet armies east of Bialystok, in north-eastern Poland. On 27 June Army Group Centre reached Minsk, the capital of Soviet Belarus, meaning the German spearhead was closer to Moscow than Berlin.

On 3 July 1941, all Soviet divisions in the Bialystok Bend of the Niemen River had been wiped out. Army Group Centre opened its pincers, and closed them again on the Red Army forces west of Minsk. The German claws snapped shut on 10 July, and in this huge trap 33 Soviet divisions were eliminated, amounting to over 300,000 men. The Russians also lost 4,800 tanks along with 9,400 guns and mortars.

Southward, Gerd von Rundstedt‘s Army Group South attacked the region of Galicia, which covers parts of eastern Poland and western Ukraine. Soviet forces were larger here and they fought superbly well, under the leadership of General Mikhail Kirponos, who would be killed almost three months later near Kiev in a landmine explosion. Army Group South made slow progress at first, not more than six miles per day. However, before June 1941 was out, Field Marshal von Rundstedt’s army had broken into the Ukraine, capturing the cities of Rovno on 28 June and Lvov on 30 June. 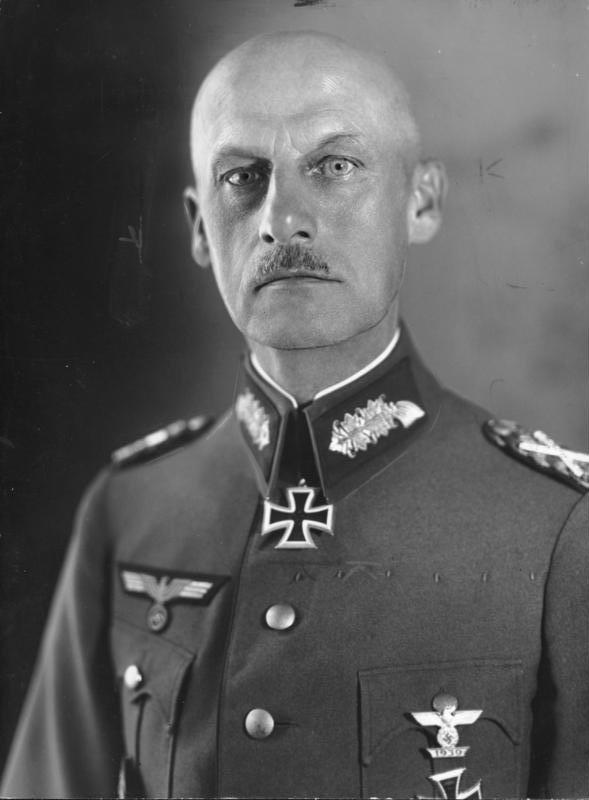 Army Group North, commanded by Field Marshal Ritter von Leeb, made initial rapid progress. As part of Panzer Group 4, General Erich von Manstein’s 56th Panzer Corps sliced through Lithuania and, by 25 June, had advanced 155 miles to safely capture the bridge over the Daugava River at Daugavpils, in south-eastern Latvia. Von Manstein was halted here for six days, until the German 16th Army infantry divisions could catch up with him. This delay for Army Group North allowed the Russians to fortify their rearguard. When von Leeb’s advance resumed on 2 July 1941, they met much stiffer resistance.

In the Soviet Army’s central section, their 48-year-old General Andrey Yeremenko, commanding the Soviet Western Front, had instilled new life into the defence. During early July it rained heavily for a brief time, helping further to slow the main German advance. Despite these obstacles, Fedor von Bock’s Army Group Centre captured Vitebsk, in north-eastern Belarus, on 10 July. That same day, Guderian’s panzers managed to cross the Dnieper River, which flows through eastern Belarus and central Ukraine.

On 16 July 1941, Army Group Centre was at the outskirts of the Russian city of Smolensk, 230 miles from Moscow as the crow flies. It meant, in just over three weeks of fighting, that the Germans had advanced more than two-thirds of the way to Moscow. The Wehrmacht’s timetable was running as scheduled. At this period, it seemed that a German victory was inevitable. Already on 15 July, General Hermann Hoth‘s Panzer Group 3 had bypassed Smolensk to the north, and successfully cut the Smolensk-Moscow highway. 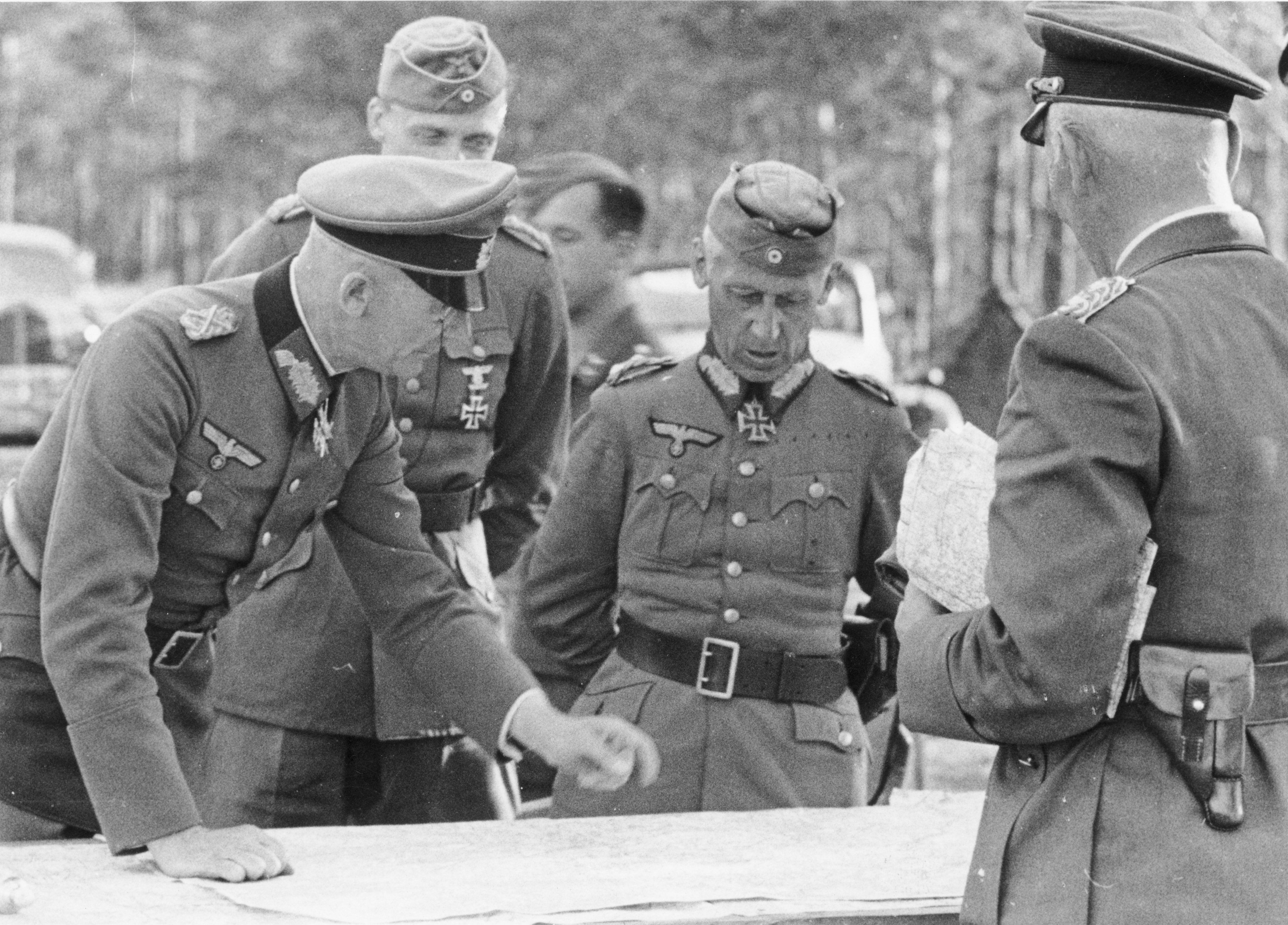 Yet the USSR did not crumble like past Wehrmacht victims had. On 16 July the German pincers closed around Smolensk, but the encircled Russians fought on for another three weeks, until 7 August. The Germans captured another 300,000 Soviet troops, but their own casualties were not insignificant and they paused for reorganisation. A principal difference between the Nazi invasion of France, and the Soviet Union, was that the landmass was so much bigger in the latter nation, and the distances therefore took longer to navigate. In addition, the French road networks were of superior quality to the Russian road system.

As soon as the Germans halted at Smolensk, Soviet troops launched a vigorous counterattack. Extremely heavy fighting ensued in the Yelnya Bend east of Smolensk, and it continued through August 1941. North of the Smolensk-Moscow highway, the Russians also counterattacked, using for the first occasion one of their secret weapons: the Katyusha rocket launcher which the Germans nicknamed “The Stalin Organ”, due to its melancholy wailing sound as it fired multiple rockets. The Russians had 1,000 Katyusha rocket launchers in service during the second half of 1941.

In mid-August 1941 the German invasion was eight weeks old, the length of time in which Adolf Hitler, his commanders and also the Americans and British expected the USSR to be overthrown. By late summer, the Wehrmacht had conquered a great deal of territory but the leading goal, of annihilating the Soviet armies west of the Dnieper River, had not been accomplished.

Below the Pripet Marshes, von Rundstedt’s Army Group South took the Ukrainian cities of Zhitomir and Uman. In the latter city in central Ukraine, four panzer divisions surrounded and destroyed three Russian armies in the first week of August 1941. Hitler and his Axis ally Benito Mussolini visited Uman later that month, on 28 August, in order to inspect the Italian expeditionary force and to call on von Rundstedt’s headquarters, which were located in Uman.

Army Group South now marched down the southern side of the Dnieper Bend, and on 18 August 1941 reached Zaporozhye. On 24 August at Zaporozhye, the Russians blew up their Dnieper Dam in order to stall the enemy. Two days later, the city of Dnipropetrovsk fell to the Germans, little more than 40 miles north of Zaporozhye. The Romanian 4th Army, in the meantime, invaded southern Ukraine and encircled Odessa, a city which contained 600,000 residents, a third of them Jewish. The Romanian 4th Army was joined in the Siege of Odessa by the German 11th Army, but Odessa did not capitulate until 16 October 1941.

Progress was not as quick as Army Group North had expected either. In the north-western USSR, the terrain was more suited to defending and the front was shorter, making it easier for the Soviets to hold the Germans up. Red Army divisions in this sector launched counterattacks too but, regardless, Army Group North captured the Russian city of Pskov on 9 July 1941, fewer than 150 miles south-west of Leningrad.

The way appeared open for a march on Leningrad, between Lake Peipus and Lake Ilmen. This route ensured that the Germans could link up with Marshal Gustaf Mannerheim‘s Finnish Army, which was attacking the Russians across the Karelian Isthmus east of Lake Ladoga, Europe’s biggest lake. Hitler stated that, “We Germans only have affection for Finland”, which he said was not the case between the Germans and Italians, only between himself and Mussolini. By now the Axis armies were reinforced with Hungarian, Croatian and Slovenian units.

Von Leeb’s divisions ran into a strong Soviet defensive line, bypassing Lake Ilmen and the Narva River on the Gulf of Finland, which it took Army Group North three weeks to overcome. Army Group North’s advance resumed on 8 August 1941, and though the Russians continued to resist, Novgorod fell on 15 August, one of Russia’s oldest cities.

Towards the end of August 1941, von Leeb’s left wing was within 25 miles of Leningrad. On 29 August the Finns took the town of Viipuri, less than 80 miles north-west of Leningrad. The following day, 30 August, the Germans entered the urban locality of Mga, which contained the last railway line connecting Leningrad to the remainder of Russia.

It looked as if Leningrad was doomed, and while von Leeb’s divisions closed on the famous city, another campaign was unfolding in Arctic Russia. Hitler had decided that he wanted the strategically important Russian port city of Murmansk, over 600 miles north of Leningrad. He dispatched General Eduard Dietl’s Mountain Corps, so as to capture Murmansk by advancing from the Petsamo region of northern Finland. Further south, the German 36th Corps was to sever the Murmansk railway line at the town of Kandalaksha; and further south still, the 3rd Finnish Corps was to cut the rail link at Loukhi.

All three of these German-Finnish operations failed, and Murmansk remained in Soviet hands but it was continually bombed by the Luftwaffe.

Regarding president Franklin Roosevelt’s Lend-Lease program signed into law in March 1941, American equipment entered Murmansk harbour from December 1941. The US military hardware, it should be highlighted, would amount to a small fraction of the matériel Soviet Russia had at its disposal throughout the entire war – the great majority of which was domestically produced by the Russians.

Hardly a scrap of US or British military aid was sent to the Red Army, when the critical fighting was occurring from the late summer to the early winter of 1941. This suggests the Anglo-American powers were quite content to sit back, and watch the Germans and Soviets knock lumps out of each other; while the Americans, in particular, gathered their strength on the sidelines for the conflict they knew they would enter before long.

“Out of the almost $46 billion that was spent on all Lend-Lease aid, the US allocated only $9.1 billion, i.e., only a little more than 20% of the funds, to the Red Army, which defeated the vast majority of the divisions from Germany and her military satellites. During that time the British Empire was given more than $30.2 billion, France – $1.4 billion, China – $630 million, and even Latin America (!) received $420 million”.

By the final week of August 1941, von Bock’s Army Group Centre was 185 miles from Moscow. The German High Command (OKH) knew what the next objective should be: the Russian capital, in front of which the bulk of the Red Army was being massed for its defence. OKH issued an order on 18 August for the taking of Moscow, but Hitler instead intervened fatally in the war, believing that he knew more about military affairs than the generals. On 21 August he set Moscow temporarily to one side, and ordered that the Wehrmacht capture various targets including Kiev, Leningrad and the Crimea.

This gave Joseph Stalin time to bolster the Soviet defences in front of Moscow. Army Group South was the main beneficiary of Hitler’s reallocation of German divisions, as Army Group Centre was stripped of four of its five panzer corps and three infantry corps; but even the Army Group South commander, von Rundstedt, felt those forces should have remained in the centre for the drive on Moscow.

Shane Quinn obtained an honors journalism degree and he writes primarily on foreign affairs and historical subjects. He is a frequent contributor to Global Research.

Yitzhak Arad, The Holocaust in the Soviet Union (University of Nebraska Press, 25 July 2013)