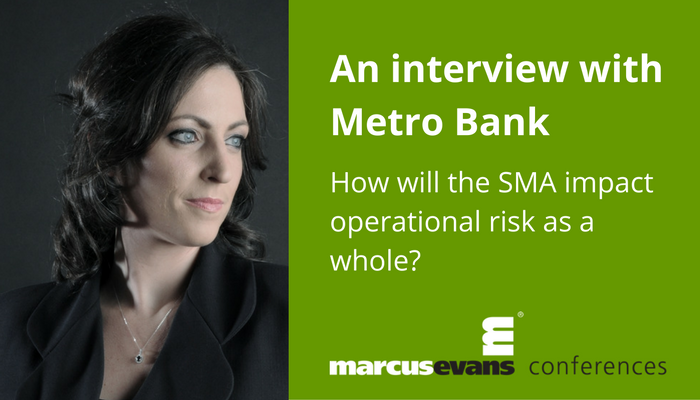 Operational risk management is currently on the end of a major shakeup. Ever since the announcement of Basel III banks have been working within a paradigm that pushes towards either TSA or AMA approaches (standardised and advanced approaches respectively). At the end of 2015, however, the Basel Committee shocked firms by announcing that they were doing away with this, and replacing it with the SMA – a new standardized approach that would be the norm for all banks. This is having huge ramifications for firms, who now need to contemplate tearing up everything they have worked on for the past half decade and starting afresh. All this is being done against a background of continued threats from operational risks such as cyber and IT risk. This event will show attendees exactly what the SMA means for them and how to make the changes whilst maintaining a robust operational risk management framework.

Ahead of the 7th Annual Operational Risk Management Forum , we spoke with Mrs. Simona Fionda, Head of Operational Risk at Metro Bank about the new requirements of SMA and how the SMA will impact operational risk as a whole.

The main challenge that BCBS faces is addressing the discontent expressed by large European banks with the increased capital requirements as a result of the changes proposed. On 16 September Bloomberg reported that ―regulators from countries including Germany and Italy told the BCBS that proposed changes to how banks assess credit, market and operational risks must be scaled back and slowed down‖. This discontent is supported by the fact that BCBS stated intention was to simplify and standardise not to significantly increase capital requirements.
The main challenge for banks, as is generally the case with changes in regulation, is the implementation timescale. First and foremost, it will be important to understand how much of the feedback received has been taken into account. The responses to the consultation highlighted a number of concerns that appeared as recurrent themes across the industry, internationally. It is usual for BCBS to request implementation of final rules two years after publication, which would mean implementation by the end of 2018. Banks should start parallel running their current approach and the new SMA once the rules are published to ensure all processes are in place and any difficulties can be discussed with the regulator ahead of the compliance date.

This marcus evans event will give companies the best practices and strategies to begin to implement the SMA and assess the impacts it will have on both internal modelling and operational risk management. They will discover and understand the major challenges on the horizon, including the move to the SMA and cyber and IT risk. They will gain an advantage over competitors by hearing from experts that will provide both insight and innovation in dealing with operational risk frameworks.

The 7th Annual Operational Risk Management Forum will take place from the 21st until the 23rd of November 2016 in London, UK.