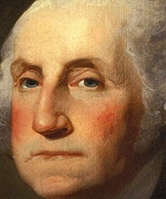 The primary author of the Constitution – and later president – James Madison wrote:

The great object [of political parties] should be to combat the evil: 1. By establishing a political equality among all. 2. By withholding unnecessary opportunities from a few, to increase the inequality of property, by an immoderate, and especially an unmerited, accumulation of riches. 3. By the silent operation of laws, which, without violating the rights of property, reduce extreme wealth towards a state of mediocrity, and raise extreme indigence towards a state of comfort.

Of all the enemies to public liberty war is, perhaps, the most to be dreaded, because it comprises and develops the germ of every other. War is the parent of armies; from these proceed debts and taxes; and armies, and debts, and taxes are the known instruments for bringing the many under the domination of the few. In war, too, the discretionary power of the Executive is extended; its influence in dealing out offices, honors, and emoluments is multiplied; and all the means of seducing the minds, are added to those of subduing the force, of the people. The same malignant aspect in republicanism may be traced in the inequality of fortunes, and the opportunities of fraud, growing out of a state of war, and in the degeneracy of manners and of morals engendered by both. No nation could preserve its freedom in the midst of continual warfare.

[America] “will not be less advantageous to the happiness of the lowest class of people, because of the equal distribution of property.”

… unequal division of property which occasions the numberless instances of wretchedness which I had observed in this country and is to be observed all over Europe. The property of this country is absolutely concentered in a very few hands, having revenues of from half a million of guineas a year downwards. These employ the flower of the country as servants, some of them having as many as 200 domestics, not labouring. They employ also a great number of manufacturers, and tradesmen, and lastly the class of labouring husbandmen. But after all these comes the most numerous of all the classes, that is, the poor who cannot find work. I asked myself what could be the reason that so many should be permitted to beg who are willing to work, in a country where there is a very considerable proportion of uncultivated lands? These lands are kept idle mostly for the aske of game. It should seem then that it must be because of the enormous wealth of the proprietors which places them above attention to the increase of their revenues by permitting these lands to be laboured.

I am conscious that an equal division of property is impracticable. But the consequences of this enormous inequality producing so much misery to the bulk of mankind, legislators cannot invent too many devices for subdividing property, only taking care to let their subdivisions go hand in hand with the natural affections of the human mind.The descent of property of every kind therefore to all the children, or to all the brothers and sisters, or other relations in equal degree is a politic measure, and a practicable one.

Another means of silently lessening the inequality of property is to exempt all from taxation below a certain point, and to tax the higher portions of property in geometrical progression as they rise. Whenever there is in any country, uncultivated lands and unemployed poor, it is clear that the laws of property have been so far extended as to violate natural right.

The earth is given as a common stock for man to labour and live on. If, for the encouragement of industry we allow it to be appropriated, we must take care that other employment be furnished to those excluded from the appropriation. If we do not the fundamental right to labour the earth returns to the unemployed. It is too soon yet in our country to say that every man who cannot find employment but who can find uncultivated land, shall be at liberty to cultivate it, paying a moderate rent. But it is not too soon to provide by every possible means that as few as possible shall be without a little portion of land. The small landholders are the most precious part of a state.

Alexander Hamilton argued for widespread ownership of assets, warning in 1782:

Whenever a discretionary power is lodged in any set of men over the property of their neighbors, they will abuse it.

Hamilton argued that a strong middle class was needed to become energetic customers of businesses in the entire economy.

John Adams feared that “monopolies of land” would destroy the nation and that an oligarchy arising out of inequality would manipulate voters, creating “a system of subordination to all… The capricious will of one or a very few” dominating the rest.

Adams wrote that – unless constrained –  “the rich and the proud” would deploy economic and political power that “will destroy all the equality and liberty, with the consent and acclamations of the people themselves.”  He therefore favored “preserving the balance of power on the side of equal liberty and public virtue (by making) … the acquisition of land easy to every member of society.”

When he was elderly,  Adams wrote that the goal of the democratic government was not to help the wealthy and powerful but to achieve “the greatest happiness for the greatest number.”

It wasn’t just James Madison and John Adams. Other be-wigged early presidents of the U.S. and half the crew on Mt. Rushmore — George Washington and Thomas Jefferson — believed that U.S. democracy would work best if citizens had a broad-based ownership stake in the economy. They too feared that extreme property inequality would prevent America from fulfilling its promise.

Why Too Much Inequality Goes Against Conservative Values

After all, the Founding Fathers fought for freedom from an oppressive central bank which sucked the prosperity out of the economy, but the  Federal Reserve’s policies have created inequality even worse than experienced by slaves in Colonial America in 1774.

And the Founding Fathers also launched the Revolutionary War because the British government was engaging in crony capitalism (which constituted taxation without representation), instead of letting the colonists have a shot at free market competition. The modern American authorities are doing the same thing.

Likewise, the “father of free market capitalism” – Adam Smith – railed against monopolies, supported regulation of banks and the financial sector … and said that inequality should not be a taboo subject.

An imbalance between rich and poor is the oldest and most fatal ailment of all republics.

Libertarian champion Ron Paul says that the system is rigged for the rich and against the poor and the middle class:

In fact, there are at least 6 solid conservative reasons – based upon conservative values – for reducing runaway inequality.

We’re not calling for redistributing wealth from the rich. After all, Jefferson said:

To take from one, because it is thought that his own industry and that of his fathers has acquired too much, in order to spare to others, who, or whose fathers have not exercised equal industry and skill, is to violate arbitrarily the first principle of association, —the guarantee to every one of a free exercise of his industry, & the fruits acquired by it.’

But we do support clawing back ill-gotten gains from criminals under well-established fraud principles:

And it’s not like we want to level income. I’m not saying spread the wealth around, which got Obama in trouble. But I think, I would hope that this would be a time for a national consideration about policies that would focus on restraining any possible furtherincreases in inequality.

For example, if we stop bailing out the Wall Street welfare queens, the big banks would focus more on traditional lending and less on speculative casino gambling.  Indeed, if we break up the big banks, it will increase the ability of smaller banks to make loans to Main Street, which will level the playing field.

And using current fraud laws would do the trick in prosecuting Wall Street criminality.  These are all solidly conservative principles.

After all, bad government policy is responsible for the medieval, king-and-serf levels of inequality and social mobility which are destroying our economy.

Every conservative (and liberal) should be disgusted by those results.

Postscript: Madison is also reputed to have said:

We are free today substantially but the day will come when our Republic will be an impossibility. It will be impossibility because wealth will be concentrated in the hands of a few. A republic cannot stand upon bayonets, and when that day comes, when the wealth of the nation will be in the hands of a few, then we must rely upon the wisdom of the best elements in the country to readjust the laws of the nation to the changed conditions.

However, the quote has not been authenticated in Madison’s records.