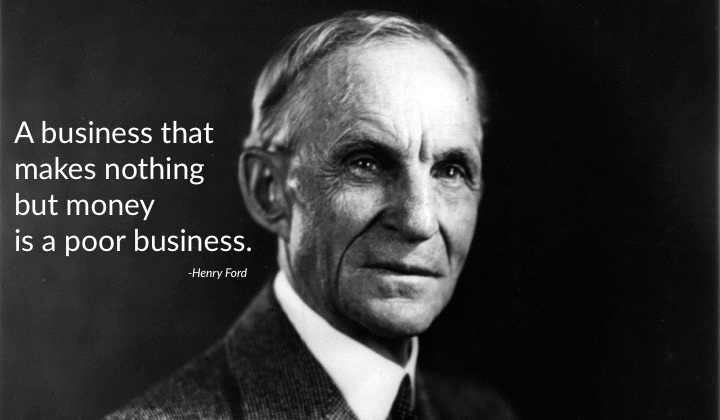 Like so much of what Deming said that makes sense to me. It is my sense the "conventional wisdom" would state something more along the lines of the purpose of a company is to make money. I would not agree. Rewarding the owners is important, but other stakeholders should be included in the purpose. Even with a strictly legal argument it is not true that a company exists only to make money. The company enters into legal obligations to employees, suppliers, customers and communities.

Conventional wisdom agrees that a company must comply with the law. Many of those laws are requirements society has put in place to ensure that companies focus on obligations to their customers, community, suppliers and the environment (over the long term).

Some might chose to view those legal requirements as only a means to make money. That a company exists to make money and that so long as a law doesn't require something else; any decision should be based only on long term financial benefit. I would not agree. The laws are a manifestation of the belief of the society that other important considerations exists that must be considered.

In the early stages of capitalism the business world was largely seen as amoral. That is no longer the case (again as I see "conventional wisdom"). Most, though not all, believe that companies have moral obligations to the environment, community, customers and employees. Many of these obligations have been turned into laws (just as there are laws that require the interests of the shareholders to be cared for). Those laws set the minimum legal limit that must be met. And they seem to pretty clearly express the decision society has made that companies exist within a society and have a larger purpose than making money for the owners. One benefit of companies is that they reward those who invested in them. They also provide jobs to employees and products and services to customers.

How those interests are balanced is not such an easy issue to address. I think Deming's quote is a good starting point for discussion. Right now we have the balance pretty heavily in favor of the owners (and making profit). I personally, think it makes sense to have that as a very important factor, though I favor increasing the focus on some other factors than is the current normal practice. Most importantly, I believe we need to increase the importance of the purpose of providing good jobs for employees.

The marketplace does a pretty good job of asserting the importance of customers and suppliers. Even so, regulation and law enforcement are necessary actors in those instances where the free market is insufficient. The changes in the world are making it very difficult for the community interests to be respected. And I think that this trend with likely increase. I plan to think more about what this will mean going forward.

There is an important difference between those that see the only true purpose of a company is making money and those that see a variety of purposes that must be balanced. I hope we can move the conventional wisdom to a more balanced view of the importance of the various stakeholders from what I see now as the current unhealthy focus.