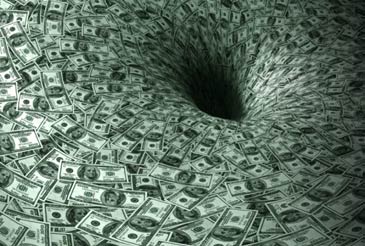 The Web of Debt Blog

In uncertain times, “cash is king,” but central bankers are systematically moving to eliminate that option. Is it really about stimulating the economy? Or is there some deeper, darker threat afoot?

Remember those old ads showing a senior couple lounging on a warm beach, captioned “Let your money work for you”? Or the scene in Mary Poppins where young Michael is being advised to put his tuppence in the bank, so that it can compound into “all manner of private enterprise,” including “bonds, chattels, dividends, shares, shipyards, amalgamations . . . .”?

That may still work if you’re a Wall Street banker, but if you’re an ordinary saver with your money in the bank, you may soon be paying the bank to hold your funds rather than the reverse.

Four European central banks – the European Central Bank, the Swiss National Bank, Sweden’s Riksbank, and Denmark’s Nationalbank – have now imposed negative interest rates on the reserves they hold for commercial banks; and discussion has turned to whether it’s time to pass those costs on to consumers. The Bank of Japan and the Federal Reserve are still at ZIRP (Zero Interest Rate Policy), but several Fed officials have also begun calling for NIRP (negative rates).

The stated justification for this move is to stimulate “demand” by forcing consumers to withdraw their money and go shopping with it. When an economy is struggling, it is standard practice for a central bank to cut interest rates, making saving less attractive. This is supposed to boost spending and kick-start an economic recovery.

That is the theory, but central banks have already pushed the prime rate to zero, and still their economies are languishing. To the uninitiated observer, that means the theory is wrong and needs to be scrapped. But not to our intrepid central bankers, who are now experimenting with pushing rates below zero.

Locking the Door to Bank Runs: The Cashless Society

The problem with imposing negative interest on savers, as explained in the UK Telegraph, is that “there’s a limit, what economists called the ‘zero lower bound’. Cut rates too deeply, and savers would end up facing negative returns. In that case, this could encourage people to take their savings out of the bank and hoard them in cash. This could slow, rather than boost, the economy.”

Again, to the ordinary observer, this would seem to signal that negative interest rates won’t work and the approach needs to be abandoned. But not to our undaunted central bankers, who have chosen instead to plug this hole in their leaky theory by moving to eliminate cash as an option. If your only choice is to keep your money in a digital account in a bank and spend it with a bank card or credit card or checks, negative interest can be imposed with impunity. This is already happening in Sweden, and other countries are close behind. As reported on Wolfstreet.com:

The War on Cash is advancing on all fronts. One region that has hogged the headlines with its war against physical currency is Scandinavia. Sweden became the first country to enlist its own citizens as largely willing guinea pigs in a dystopian economic experiment: negative interest rates in a cashless society. As Credit Suisse reports, no matter where you go or what you want to purchase, you will find a small ubiquitous sign saying “Vi hanterar ej kontanter” (“We don’t accept cash”) . . . .

The Lesson of Gesell’s Decaying Currency

Whether negative interests will actually stimulate an economic recovery, however, remains in doubt. Proponents of the theory cite Silvio Gesell and the Wörgl experiment of the 1930s. As explained by Charles Eisenstein in Sacred Economics:

The pioneering theoretician of negative-interest money was the German-Argentinean businessman Silvio Gesell, who called it “free-money” (Freigeld) . . . . The system he proposed in his 1906 masterwork, The Natural Economic Order, was to use paper currency to which a stamp costing a small fraction of the note’s value had to be affixed periodically. This effectively attached a maintenance cost to monetary wealth.

. . . [In 1932], the depressed town of Wörgl, Austria, issued its own stamp scrip inspired by Gesell . . . . The Wörgl currency was by all accounts a huge success. Roads were paved, bridges built, and back taxes were paid. The unemployment rate plummeted and the economy thrived, attracting the attention of nearby towns. Mayors and officials from all over the world began to visit Wörgl until, as in Germany, the central government abolished the Wörgl currency and the town slipped back into depression.

. . . [T]he Wörgl currency bore a demurrage rate [a maintenance charge for carrying money] of 1 percent per month. Contemporary accounts attributed to this the very rapid velocity of the currencies’ circulation. Instead of generating interest and growing, accumulation of wealth became a burden, much like possessions are a burden to the nomadic hunter-gatherer. As theorized by Gesell, money afflicted with loss-inducing properties ceased to be preferred over any other commodity as a store of value.

There is a critical difference, however, between the Wörgl currency and the modern-day central bankers’ negative interest scheme. The Wörgl government first issued its new “free money,” getting it into the local economy and increasing purchasing power, before taxing a portion of it back. And the proceeds of the stamp tax went to the city, to be used for the benefit of the taxpayers. As Eisenstein observes:

It is impossible to prove . . . that the rejuvenating effects of these currencies came from demurrage and not from the increase in the money supply . . . .

Today’s central bankers are proposing to tax existing money, diminishing spending power without first building it up. And the interest will go to private bankers, not to the local government.

Consumers today already have very little discretionary money. Imposing negative interest without first adding new money into the economy means they will have even less money to spend. This would be more likely to prompt them to save their scarce funds than to go on a shopping spree.

People are not keeping their money in the bank today for the interest (which is already nearly non-existent). It is for the convenience of writing checks, issuing bank cards, and storing their money in a “safe” place. They would no doubt be willing to pay a modest negative interest for that convenience; but if the fee got too high, they might pull their money out and save it elsewhere. The fee itself, however, would not drive them to buy things they did not otherwise need.

Is There a Bigger Threat than a Sluggish Economy?

The scheme to impose negative interest and eliminate cash seems so unlikely to stimulate the economy that one wonders if that is the real motive. Stopping tax evaders and terrorists (real or presumed) are other proposed justifications for going cashless. Economist Martin Armstrong goes further and suggests that the goal is to gain totalitarian control over our money. In a cashless society, our savings can be taxed away by the banks; the threat of bank runs by worried savers can be eliminated; and the too-big-to-fail banks can be assured that ample deposits will be there when they need to confiscate them through bail-ins to stay afloat.

And that may be the real threat on the horizon: a major derivatives default that hits the largest banks, those that do the vast majority of derivatives trading. On November 10, 2015, the Wall Street Journal reported the results of a study requested by Senator Elizabeth Warren and Rep. Elijah Cummings, involving the cost to taxpayers of the rollback of the Dodd-Frank Act in the “cromnibus” spending bill last December. As Jessica Desvarieux put it on the Real News Network, “the rule reversal allows banks to keep $10 trillion in swaps trades on their books, which taxpayers could be on the hook for if the banks need another bailout.”

The promise of Dodd-Frank, however, was that there would be “no more taxpayer bailouts.” Instead, insolvent systemically-risky banks were supposed to “bail in” (confiscate) the money of their creditors, including their depositors (the largest class of creditor of any bank). That could explain the push to go cashless. By quietly eliminating the possibility of cash withdrawals, the central bank can make sure the deposits are there to be grabbed when disaster strikes.

If central bankers are seriously trying to stimulate the economy with negative interest rates, they need to repeat the Wörgl experiment in full. They need to first get some new money into the economy, money that goes directly to the consumers and local businessmen who will spend it. This could be achieved in a number of ways: with a national dividend; or by using quantitative easing for infrastructure or low-interest loans to states; or by funding free tuition for higher education. Consumers will hit the malls when they have some new discretionary income to spend.

Ellen Brown is an attorney, founder of the Public Banking Institute, and author of twelve books including the best-selling Web of Debt. Her latest book, The Public Bank Solution, explores successful public banking models historically and globally. Her 300+ blog articles are at EllenBrown.com. Listen to “It’s Our Money with Ellen Brown” on PRN.FM.