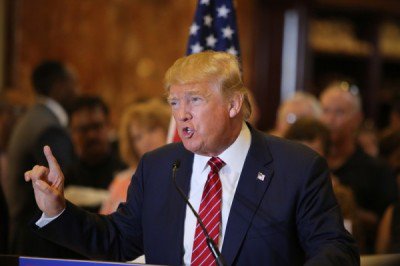 Joining the Dots: Why the Establishment Hates Donald Trump

On the face of it, Trump is Reagan on steroids. His towering size, his nativist US supremacism, his down-home talk, and  his reality-show confidence make him ideal for the role of bullying and big lies from the oval office.

He is America come to meet itself in larger-than-life image to rejuvenate it as its pride slips away in third-world conditions and a multi-polar world.

While Trump’s narrative is that the American Dream seeks recovery again, the dominant media and political elite relentlessly denounce him as an implicit fascist and disastrous fake.

Something deeper is afoot. An untapped historic resentment is boiling up from underneath which has long been unspeakable on the political stage. Trump has mined it and proposed a concrete solution always denied of his candidacy. From his promise to halve the Pentagon’s budget to getting the Congress off corporate-donation payrolls, the public money that the big corporate lobbies stand to lose from a Trump presidency are off the charts. But his attackers dare not recognize these explosive issues because they are all part of the problem.

You can read the rest of this excellent article in the following link: