The Risky Future of Oil 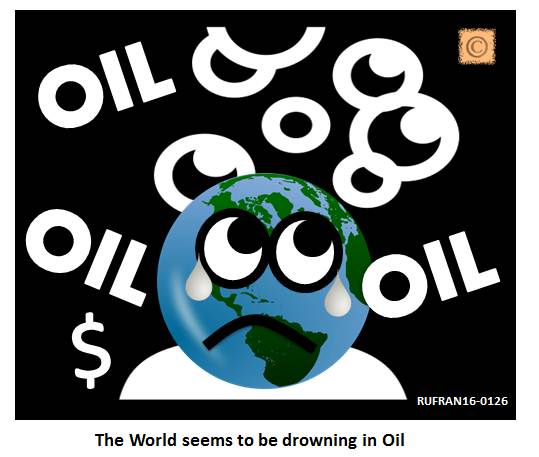 No one expert knows exactly how much oil out there exceeds the global volumetric demand but all seem to agree that the entire world is drowning in it. The Gulf countries, foremost Saudi Arabia are reportedly pumping at almost maximum capacity without blinking an eye.

There are now more than three billion barrels of excess supply in world oil markets, according to the International Energy Agency last November 2015. In its latest monthly report, the IEA said this "massive cushion" of excess supply has grown as oil prices have fallen to a new normal of around $50 billion barrels a day (The Telegraph, 2015). We can all extrapolate what is the current figure as of today and we won’t be dead wrong.

Canada is one of the heaviest hit oil producers in the world. Alberta is the premier oil producer and considered by many to be the bread basket of the whole country. It is well accepted that it has an oil run economy. In the last five to ten years, Canada's oil deposits were inventoried and found to be more abundant than previously perceived.

Wikipedia recorded that the Oil reserves in Canada were estimated at 172 billion barrels as of the start of 2015. This figure includes the oil sands reserves that are estimated by government regulators to be economically producible at current prices using current technology. According to this figure, Canada's reserves are third only to Venezuela and Saudi Arabia. Alberta has 39% of Canada's remaining conventional oil reserves, offshore Newfoundland 28% and Saskatchewan 27%, but if oil sands are included, Alberta's share is over 98%.

Canada therefore is an emerging world oil power and offers more opportunities leveraging a better positioned government system, international reputation, political stability, regulatory compliance, logistics and infrastructures. It now found its way up the top tier of the hierarchy, firmly demonstrating that Canada can potentially take the rein in the near future.

However, much of the oil in Canada is too expensive to produce. Generating oil from oil sands of northern Alberta is among the most expensive on Earth.  Mine specialists even remarked that there is “no oil price low enough” for them to significantly cut back on production. Rationale: The significant costs involved in shutting down such massive industrial processes and then attempting to restart them when prices rebound is just too prohibitive (BNN, 2015.What oil at $20 a barrel would mean for Canada's energy sector).

It is no wonder that entrenched oil kings like Saudi Arabia and Venezuela will want to drive out higher-cost producers from the industry as alleged by some oil pundits.

In risk-based management, one tries to anticipate the risk. The risk is either a threat or an opportunity. The issues of today are the risks of the past. The risks of the future are driven by the issues and problems of today. How the issues are addressed today will decide what happen in the future. These are fundamentals of risk and risk-based management. The risky future of oil points to the events that threaten it and the opportunities that come close behind ( Frago, R., 2015.Risk-based Management in the World of Threats and O...).

With Iran back in play, it won't be long before the Iranians fully open their discharge valve occupying whatever space is left to take. The Saudis are doing all they can to protect and even grow market shares. The object is to prevent arch rival Iran from surging back with vengeance. It means that whatever good things the last twelve months retreat shelving drilling, exploration, and billions worth of projects, truth of the matter is, it might not be enough.

The competition between these two in an already flooded market spells further depression of oil price. Oil plunging past the $25 a barrel (WTI) is now a grim reality unless major events short of epic proportion (upheavals) occur in the next nine to twelve months. If the trend continues and no major move happens, it is probable that further dip will scratch the $20 dollar mark within a year to one and a half year, a scenario which is a lot less certain when I wrote my last article on the subject last August 2015 (Frago, R., 2015. Oil Price, Recession: Causes, Issues and Risks).

What are examples of major events? What are upheavals? In my opinion, here are some of them:

1) All out wars between major oil producing nations. Remember what happened next after much of Kuwait's oil fields were burned by the Iraqis during their 1990 invasion of the country.

The more than half a year occupation of Kuwait quickly more than doubled the average price of crude to as high as $46 dollars a barrel. If the Americans and its allies had not intervened, the supply of oil would have been drastically curtailed for the long term. We might all be talking shortage today instead of a glut.

I am not suggesting war as a solution but as one of the helpless bench sitters, merely pointing to what can be seen as a positive consequence to those whose bread and butter depends on oil and gas. As the saying goes, one man’s opportunity is another man’s demise.

2) Complete neutralization of ISIS, its affiliates, and its oil cartel's infrastructure. Eradication of the extremist group will consequently remove their reported growing illegal market share, where they sell as low as they can, to entice some businessmen. The Turkey connection is well-documented and was in the news many times.

Russian satellite images of the heavy-duty trucks show that the oil transportation route runs from Deir-ez-Zor province (an ISIS stonghold), through the outskirts of Syria and on to Mosul, Iraq, IBT reported. The path, which is locally known as the “eastern-route”, has been used by ISIS militants Russian intelligence says (Rabisha, A., 2015.12,000 Oil Smuggling Trucks Photographed Crossing Into Turkey From Iraq\Oilpro\Mintpressnews).

Since the selling price is so low, these people target to sell the highest volume they can muster at an even lower price, drowning the market some more. It might not be as big as the volume being produced by the big players, but the estimated 40,000 barrels a day reported in the last quarter of 2015 was quite substantial.

Stopping all illegal commerce can better today’s situation. This becomes possible only with the unequivocal condemnation of the violence and the actual all out ground force participation of rich and influential oil producing Muslim countries. The so called pin-point air assault is exactly what it is. It has a pin prick effect.

3) Major shift in American policy both international and domestic can bring the much needed balance to the issues. It is what majority of the American public is craving for regardless of how crazy the available options might sound on all fronts, including selecting who will sit next in the White House.

No wonder Donald Trump is on a high horse and really riding it high. He is feeding the hunger and thirst of the population, riding the crest of the wave that will take him home to the oval office. He might be crazy but the voters can become even crazier. Obama is not the only recipient of such skewed sense of purpose.

4) More operating refineries, downstream production plant, more oil-based power generation and manufacturing plant. It is logical that in order to solve overproduction, the world has to increase its demand. New manufacturing companies and emerging businesses requiring efficient source of energy will help alleviate the crunch. This is especially true with big companies that have an upstream to downstream integrated portfolio. As I have heard in the last two years, “refining is good place to be in right now.” Unfortunately, there’s but a handful of Canadian companies having such merit. Somehow, downstream earnings compensate for the upstream losses.

5) Closer, more productive and cooperative engagement of OPEC cartel members. It is a widely known estimate that OPEC controls around 40 to 50 percent of the world’s oil supply. When big oil producing countries manage to sit and cooperate, they can reap the highest benefits with the world at their mercy.

The truth of the matter is; it is always easier said than done.

Each country is a part of a great relationship network that has no end where each one has a purpose. The member country is represented by people who primarily perceive the others based on self-interest. It is for this reason that one has to work a lot harder to be impartial and appreciative of others (Frago, R., 2015.Linkedin\A Person Perceive Others based on his own ...). Result?Members end up arguing and refusing to cooperate. To compound the situation, even with OPEC’s resolve, without Russia’s cooperation, the positive effects will all be considerably mute.

But then again, if oil can slide in such an accelerated way as we have observed, it can surely find its way up in pretty much the same manner. So, don't be surprised!

ANNOUNCEMENT! The paperback and Kindle edition of the book "Risk-based Management in the World of Threats and Opportunities: A Project Controls Perspective" are now available. Please follow the hyperlinks for more information.

The sectional contents offer practical and common sense approach to identifying/managing risks. It is a must have for company managers, directors, supervisors, aspiring industry professionals, and even those students fresh from high school. The material is especially design to start with the foundational principles of risk gradually bringing the reader to deeper topics using a conversational style with simple terminologies. Check it out!